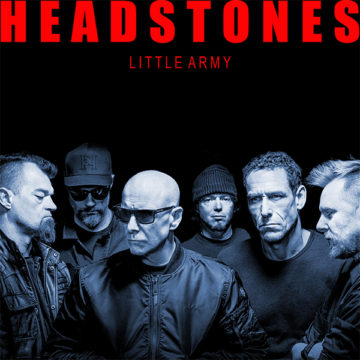 Since reforming in 2011, Kingston ’90s hard rock outfit Headstones have released one full length studio album, Love + Fury, as well as One In The Chamber Music, an acoustic album, along with a pair of singles, “Binthiswayforyears” and “Fuck It”.  Now, back with their second full length album of original music since then, Headstones have released Little Army, a record that solidifies the return of one of Canada’s strongest, hard hitting bands into the modern rock scene.  Fans have been anxiously awaiting the release of the record as the band has been teasing them with many behind the scenes clips since February.  To celebrate the release of Little Army, Headstones will perform two sets at Toronto’s Velvet Underground on June 2nd at 9 pm and 11 pm.

Opening with “Devil’s On Fire”, Headstones take a brazen stance as an old school rock band with one hell of an attitude.  Over crunching and rhythmic chords, vocalist Hugh Dillon talks about being a “red meat eater, a liar, and a cheater”” who met God at his dealer’s place, all the while, pondering what will become of him.  The song is catchy, simple, and edgy, but it poses Headstones as the weathered veterans of rock, making their dramatic-meets-devil may care return; hungry to show you just how small of a fuck they give about how the times have changed.  The changing shape of rock and a growing presence of indie rock?  Millennial politically correct culture?  None of it matters.  Headstones are loud, aggressive, abrasive, but damn if their lyrics and music are charming and reminiscent of the ’90s hard rock scene- specifically Pearl Jam and Stone Temple Pilots- while still sounding very modern.

As the album continues to roll on, Headstones showcase a number of different sides, demonstrating their versatility and strength as songwriters. The title track, “Little Army” stands out as one of the strongest tracks on the album with its raw and gritty swagger bringing what would normally be a ballad to an all new level. The song opens in a manner more traditional to ballads, yet the verse is just as aggressive and upbeat as any other track on the song. “Little Army” still fits in as a ballad, but it teeters on a thin line over some grey territory, which makes the song that much more compelling. The title track demonstrates a new depth of song writing that is nothing short of brilliant.  On the other hand, “For Your Consideration”, “Dead To Me” and the closing and incendiary track, “Don’t Think At All”  are straight up punk bangers that will become live favorites among new and old fans alike, as this very much is an album which will appeal to both. Other tracks, while still fueled by punk rock, resemble classic rock in what is a truly unique combination of styles; it’s quite rare to find a modern punk band that so closely resembles The Rolling Stones, as best heard in Dillon’s quick and almost shouted lyrics over crunching and rhythmic chords on “Broken”, the harmonica solo on “Devil’s On Fire”, and the grooves found on “Kingston” and “Los Angeles”.

Headstones are unapologetically themselves on Little Army. You can take ‘em, or leave ‘em; either way, they won’t care, but you’re day would certainly be better if you took them and cranked Little Army up to eleven. This is a band that is determined to prove their worth, that they’re just as strong after reuniting as they were in the ’90s and Little Army acts as a strong, semi-sophomoric album that signifies and solidifies their relevance in today’s shifting musical climate. The album blends punk with modern and classic rock influences to create a sound that is very much distinctive to Headstones, and ultimately is something which has been absent from the rock scene of today for far too long.  While paying tribute to the past without sacrificing innovation of the band’s identity, Headstones have delivered a record that modern rock fans of all walks have been waiting for, whether they realize it or not.

A passion for music has always been a part of Gerrod’s life. As a young boy, he was raised on a steady diet of the music from The Chili Peppers, Aerosmith, The Stones, Prince, and others from his mum. Raised in the GTA, Gerrod continued to foster his love for music by attending a wide range of concerts and learning the drums. His unapologetic passion for music has no bounds and has spread to a wide variety of styles, whether it be the 90’s rock that sound tracked his teenage years, the jazz he studied in university, or his newfound love for hip-hop. He recently received his bachelors in music and education from York University and is passionate about writing and reviewing good (and less than good) music. Gerrod is also the drummer and songwriter for a Toronto based rock & roll band, One In The Chamber.
RELATED ARTICLES
album reviewscadence musicdevil's on fire
7.0