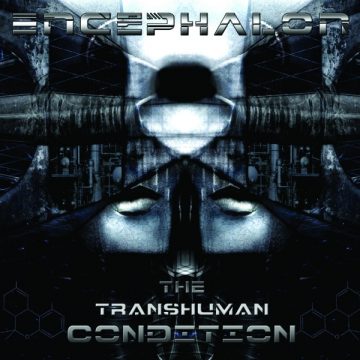 You might call it a combination of Club beats and Industrial music, Encephalon refers to their music as “Synthetic Anthems for the Permanently Numb.” The trio from Ottawa, Matt Gifford (vocals, synths, production, media), Alis Alias  (vocals, synth, multimedia), and Sam Maner (production, synths), have an innovative, Club-friendly style that continues to make an impact in the Electro-Industrial scene. After their self-released album, Drowner (2009), The Transhuman Condition is Encephalon’s first full-length album on Dependent Records. Encephalon has also previously released a plethora of remixes and also had a couple of their tracks featured on movie soundtracks such as “The Claw” in Necromentia (2009), and “Rise” in The Gene Generation (2007).

The Transhuman Condition carries a good balance of danceable beats while unleashing violent vocals of rage. The smash Club hit, and opener to the album, “Rise,” begins automatically with an infectious beat that is suddenly disrupted by Gifford’s rough-styled vocals. The follow-up track, “The Transhuman Condition” takes on more of an Industrial sound. Vocal harmonies between Gifford and Alias even each other out, as Alias adds a softer vocal tone in tracks such as “The Transhuman Condition” and “Garden.” However, Gifford shows off a softer style of vocals in “Drop Dead” and “The Killing Horizon” where he really displays his skill as a vocalist. “The Killing Horizon” also combines acoustic music with Electronica by starting off with a soft acoustic guitar riff at the beginning that is softly carried out through the song along with synth beats. This track has strong dynamics that are effective in creating a theatrical feel. Similarly, “A Lifetime of Puppetry” is a track that starts with a soft piano intro and hypes up later. More Club-like beats can be found in “Face First.”

Encephalon has an effective way of combing Electronica and Industrial music to share their own approach in creating Club anthems that all audiences may find appealing.