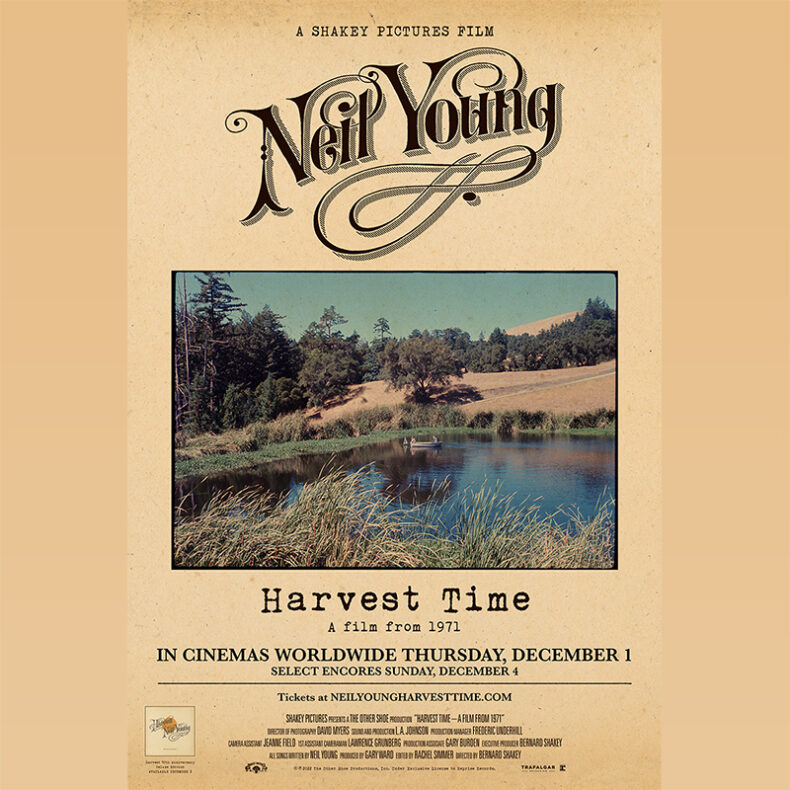 It is fascinating to watch Harvest Time – A Film From 1971.  Capturing the recording of Neil Young’s iconic 1972 album, Harvest, directed by Bernard Shakey—aka Neil Young himself, the  docufilm shows us a young artist still building his career, but on the edge of superstardom.

Harvest became an international hit, charting Number One in Canada, as well as in the US, UK, and Australian album charts. It also garnered two hit singles, “Old Man” and “Heart of Gold”. Harvest changed Neil Young’s life and career, and put him on the mainstream music map, now as a solo artist, after the success of CSNY and Buffalo Springfield. But the success was a double-edged sword, as Young later reflected that, “‘Heart of Gold’ put me in the middle of the road. Traveling there soon became a bore so I headed for the ditch”.

It is interesting, therefore, to get a glimpse of the artist and his band at work, before the success. Filmed between January and September, 1971, Harvest Time sees Young and his band (The Stray Gators) recording in the barn at his Broken Arrow Ranch in California. The film also takes us to London, where the artist worked with the London Symphony Orchestra, and to a studio in Nashville. In each of these locales, the viewer gets to be a fly on the wall, hearing early versions of songs with the band, watching Young grapple with using a full orchestra on his songs, and getting a peek at his easy camaraderie with collaborators Graham Nash and Stephen Stills.

It is wonderful to be seeing this film, 50 years after the Harvest album was released. Broadly speaking, it is a time capsule of the early 1970s, in style, language, and attitude. Specifically, it hints at aspects of Young’s strong work ethic, in addition to his personal and musical integrity. We see early signs of the artist we have come to know and love:

Director: “Are you happy with it?”

We will not give too much away here, but suffice it to say that there are many great moments on screen. The raw tightness of the band playing in Young’s barn, and the struggle to execute the lush strings on “A Man Needs A Maid” come to mind. This is a great film, not only for fans of Young, but also for anyone who is interested in the culture of the early 1970s.

Musician, writer, and grandad Bryan Williston is a fan of music in all of its forms. He loves to listen to, play, and talk about music, and to share his ideas with others. Despite the failings of humans, he is hopeful about the future, and thinks that Spill Magazine readers are just the best. Bryan lives in Whitby with an assortment of people and dogs.
RELATED ARTICLES
film reviewharvestneil young

by Aaron Badgley on December 16, 2022
REVIVAL69: THE CONCERT THAT ROCKED THE WORLD PHOTON FILMS/MYRIAD PICTURES DECEMBER 16, 2022 Revival69 is a famous, yet little spoken about, rock festival that happened in Toronto. The concert became well-known and legendary thanks to a top ten [...]

by Aaron Badgley on November 18, 2022
TUBULAR BELLS 50th ANNIVERSARY TOUR KALEIDOSCOPE FILMS/CLEOPATRA ENTERTAINMENT NOVEMBER 18, 2022 In 2021, music arranger and producer Robin Smith was tasked with bringing Tubular Bells to the stage to celebrate the 50th anniversary of the iconic [...]

by DJ Dreamdoctor on September 28, 2022
DIO: DREAMERS NEVER DIE TRAFALGAR RELEASING SEPTEMBER 28, 2022 Born in New Hampshire in 1942 and raised in Cortland, New York, an army kid named Ronald James Padavona learned how to play the trumpet at the age of 5 and listened to opera as a [...]

by Aaron Badgley on February 15, 2022
THE BEATLES AND INDIA RENOIR PICTURES/SILVA SCREEN FEBRUARY 15, 2022 There are a number of unauthorized documentaries on The Beatles. Since the advent of home video, collections of public domain footage strung together with narration and odd [...]