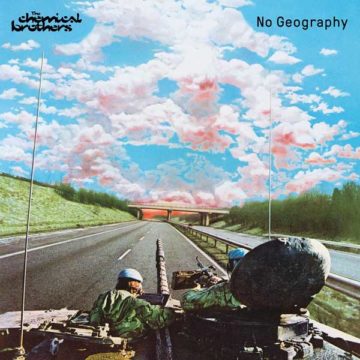 No Geography is The Chemical Brothers ninth studio album, and their first album of all new material since 2015’s Born in the Echoes. The Chemical Brothers are an electronic duo, based in Manchester and are comprised of Tom Rowlands and Ed Simons. And No Geography is another in a long line of stunning albums from this duo. Quite frankly, they never disappoint and never fail to produce albums that just might catch the listener off guard.

No Geography kicks off with “Eve of Destruction”, no, not the 1965 Barrie McGuire song of the same name, but rather a tight, solid, robotic song. The phrase “eve of destruction” is repeated to drive the point home.  Not the most comforting way to start an album, as it is rather apocalypse based, but it does set the stage for what is to follow. The album becomes kind of a rave before we all disappear from the planet. It sounds more depressing than it is, because they still produce very danceable songs.

Featuring Japanese rapper Nene and Norwegian singer-songwriter Aurora, The Chemical Brothers have produced a more dance-oriented sound, rather than the more pop-oriented music of their last few releases, but that does not mean the content is light. Also of  interest is their many references to psychedelic or 1960s rock. The opening tracks refers to a single from that era, while “Free Yourself” and “The Universe Sent Me” tip their hats to mid 1960s rock/psychedelia.

Using many samples, the group returns to what they do best. This is not so much a throwback to the 1990s, but rather a band that draws on their strengths. The songs are anthems, repetition is the key, as well as imaginative use of keyboards and programming. They also wear some of their influences on their sleeves. For example, to my ears, “MAH” (which stands for ‘mad as hell’) owes a great deal to Yazoo; not a copy but more of an homage.

The album ends with the much slower “Catch Me I Am Following”, which is one of the many highlights of the album. This brings the album to a beautiful and natural conclusion, with beautiful melody and production, and heartbreaking lyrics.

After three decades The Chemical Brothers seem to have become very secure with their own history. They are no longer trying to be at the forefront of a movement, but merely concentrating on making solid, complete albums. No Geography plays like an album, and should be listened to as such. I am quite confident many of the tracks will be remixed for clubs, but as an album No Geography holds together lyrically and musically. They know when to bring it down a slower groove and know when to kick it up. All the while it keeps the listener both entertained and more than interested.

Born and raised in Whitby, Aaron discovered music through his love of The Beatles. This led to a career in radio, writing for various publications, and ultimately a radio show about The Beatles (Beatles Universe), which ran for over four years. When not immersed in music, Aaron enjoys spending time with the loves of his life -- his wife Andrea, and daughters Emily and Linda (all of whom have an intense love of music too).
RELATED ARTICLES
album reviewalbum reviewsuniversal music
8.0