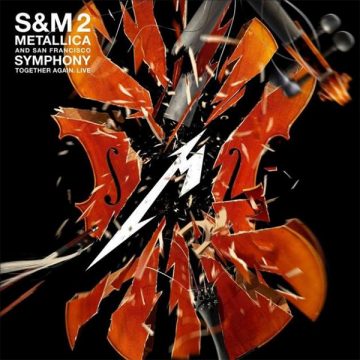 Given the success of 1999’s S&M and, more recently, 2019’s acoustic Helping Hands… Live & Acoustic At The Masonic, Metallica have returned with S&M2 a sequel to their 1999 live album which saw them perform classic material alongside an orchestra. S&M2 captures Metallica’s collaborative concert with the San Francisco Symphony from 2019 that breathes a new and fresh sense of life into the band’s vast catalogue, including some of their greatest hits, their deepest of cuts, and more recent material from 2016’s Hardwired… To Self-Destruct, their most recent studio album.

In true Metallica fashion, S&M2 opens with a live rendition of “The Ecstasy Of Gold” – a fitting tribute to the recently deceased Ennio Morricone – that showcases the San Francisco Symphony before Metallica take the stage with the instrumental “The Call Of Ktulu”. The show, however, truly kicks off with “For Whom The Bell Tolls”. The collision of hard-hitting metal and symphonic musicianship is not only in full force, but is truly exemplary. The musicianship between both ensembles is incredible, and the arrangements bring Metallica’s discography to life in a career-spanning set. Between the first three tracks, the tone is set, and S&M2 is already a winner.

Throughout its 22 tracks – clocking in at just under two and a half hours – S&M2 is a monster of a live record that takes listeners on a reflective and introspective journey through Metallica’s iconic catalogue. It goes without saying that the quintessential hits like “One”, “Master Of Puppets”, Nothing Else Matters” and “Enter Sandman” – the closing four songs – are larger-than-life musical experiences that go far beyond their original recordings in such a fantastical and climatic manner. It is surprising, however, to hear more recent songs, such as “The Day That Never Comes”, “Confusion”, “Moth Into Flame”, and “Halo On Fire”, alongside the hits as standout tracks that further intensify the experience and spectacle of the performance.

Live albums are tricky. Sometimes the audience wants a recreation of the concert experience from a particular tour or era; on other occasions, that isn’t enough. S&M2 falls into the latter where Metallica have released countless live albums – nearly every concert from the past decade has been recorded and released digitally – and despite already releasing a collaborative album with a symphony, S&M2 still manages to rise above as a unique sequel and a stunning example of the continued innovation that can go into making a live album. The performance from both Metallica and the San Francisco Symphony is incredible and the arrangements made that allow for the Symphony to play alongside Metallica in such a complimentary manner that elevates the songs and highlights particular moments, while also adding to both tension and a sense of climax, are simply brilliant. All in all, S&M2 exceeds the initial hype and excitement as yet another stellar live record from Metallica.