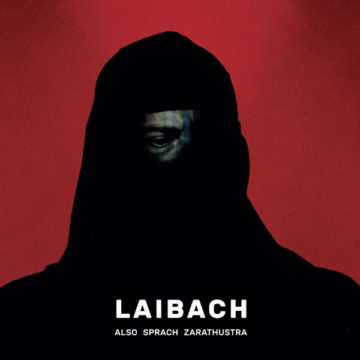 Laibach gained popularity in industrial clubs through a relatively small subset of their songs that fit in with the military aesthetic fetishism prevalent in the scene. At the core of their black little hearts however, Laibach are not an electro-industrial act, but rather a distinctly morbid variant of the avant-garde movement.

They exhibit a martial cynicism that could only be grown in the dirty petri dish of the eastern bloc. It’s almost accidental that a group of Slovenian artists who are equal parts political philosophers and bonafide shit-disturbers gained the popularity that Laibach did.

In a time of global political strife, the upsurge of divisive political groups, rampant religious fundamentalism, starving nations and stranded polar bears, a Laibach album is about due. With a title that tips its hat to Nietzsche and Strauss in one swoop, I had high hopes for this. Instead what I got is six tracks of ambient instrumental, seven minutes of what sounds like an angry hornet nest in Von den drei Verwandlungen and the rest have Milan’s familiar voice muttering about golden haired children and dark clouds.

And not that productive, government dismantling rage that Laibach usually injects in my veins. Worse, I’m disappointed.

I did mention they are avant-garde right? Laibach has done all sorts of bizarre performance art, covers and spoken word. Some of their concerts look like political rallies. In the grand scheme of their massive body of work, Also Sprach Zarathustra is hardly an outlier. It delivers what it promises: after all the album is inspired by one of the most dense bodies of literature in history and intended to be a soundtrack to a recent theatre adaptation of the novel. There is a twisted, maniacal logic to the sound, between samples of teeth gnashing, knives being sharpened and staccato metallic percussion, but is this artsy, brooding Laibach what we need right now?

Last time I heard Laibach’s name circulated in the media, it was their North Korea stunt. The concert they staged was hardly their first prospective trip to the firing squad, but what was utterly horrific was the band’s reflection on the experience. Let me clarify: half a million people starved in the DPRK in the 1990s but Laibach tell us in this Rolling Stone article that’s just a negative foreign misconception. Was ist dass Scheiße? Is this not the same group whose entire existence is a political manifesto?

Fans of the band are well acquainted with their paradoxical aesthetic and ironic symbolism, but I fear the medium has hijacked the message for Laibach. I understand taking the piss out of the hipster bible that is now Rolling Stone, but their statements are outright sickening. That interview is from two years ago, and here we are in 2017 with the same artists releasing a pretentious musical psychodrama album completely out of context to the theatrical piece it was conceptualized for. It’s not daring, or avant-garde; it’s lazy and confusing, and I’m very very disappointed.

I have only one explanation for this dastardly production, and that’s Laibach’s publicist tugging on their sleeve and suggesting that right in this very moment, Western media might not take too kindly to their trademark totalitarian-style military garb, and even their cheeky refutal of the neo-nationalist label is a lit match amid the strawmen of pop culture journalism. Laibach have dodged plenty of literal and metaphorical bottles in their days, but the gouges left by the far-swinging political pendulum in the US might be too fresh for Laibach (and who are we kidding, their numerous stakeholders) to poke their heads into.

I’ll try to be objective, but it’s hard because I’m so pissed at this album.

It’s a cool sound – if anybody but Laibach had produced this I’d be very enthused. The songs have a chilling ambient depth. I could fall asleep to this. I almost did. The orchestral tracks like “Vor Sonnen-Aufgang” are wonderful. “Von Gipfel zu Gipfel” is a very interesting pastiche of clipped glitchy sounds that would fit into an atmospheric rhythmic noise playlist next to “Gridlock and Eins Neub”

Suffice to say this should not be your last Laibach album.

I’m a geeky weirdo with her fingers in all sorts of pies. I paint and illustrate all sorts of nonsense, I make strange noises. I rant and rave, set things on fire, I’m an awesome cook and I throw a mean party.
RELATED ARTICLES
album reviewsmute records
8.0