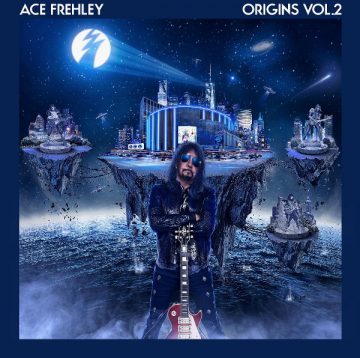 “We’ve got a little surprise for you tonight! We’re gonna turn the microphone over to Ace Frehley,” Paul Stanley famously declared on Kiss’ Shock Me (Live), released in 1977. Since then, Frehley has suffered the ups and downs of the fortunes of rock, but remains one of the great survivors from that era. While his erstwhile bandmates seem to have forgotten where a recording studio is, and are contemplating the end of the road, Frehley has gained a new lease on life, and is the only source of new music for Kiss fans starved of new material from the band.

Ace Frehley is an established songwriter. He has also had considerable success over the years with cover tunes, his first solo album spawning a US top ten hit with “New York Groove.”   He is of course a lead guitarist inducted into the Rock & Roll Hall of Fame in 2014. He is a bluesy sounding guitarist who was heavily influential in the late ’70s and creates a sound that is distinctive, but you probably buy his material for the guitar work as opposed to the vocal performance.

Here, as on Origins, he returns to The Stones for “Jumpin’ Jack Flash”, and his love of the material is clear, being similar in style to Keith Richards. For standout tracks, there is a fine rework of The Beatles’ “I’m Down” and suitably upbeat Kinks class, “Lola”. Frehley manages to give these numbers a freshness that gives the listener a chance to revisit the tracks and enjoy them all over again.

The problem with doing covers is that to do one, you really have to add something, or there is little point in simply redoing another version. This is the case with the extra track of Kiss’ “She”. There seems nothing really to be gained through him repeating his licks from back in the day. Another number that didn’t quite work was Jimi Hendrix’s “Manic Depression”.

The vinyl packages, on inspection, look very interesting. In summary, this is not Frehley breaking new ground, and he is unlikely to gain any new audience from its release. However, it is a great nostalgia trip for rock lovers, and you can tell the real affection the artist has for the music. The production is crisp, the instrumentation fresh, and the vocals pure Frehley. If you like classic rock from the ‘60s and ‘70s then this is a solid listen. As a last note, the video for “Space Truckin” needs a watch if you are a fan of Frehley or of ‘70s Kiss. There are so many humorous visual asides, space bear and more, that Ace Frehley fans will really enjoy.

The Spill Magazine is a Toronto-based online publication dedicated to covering the independent music scene with a strong focus on our thriving hometown talent. Our writers bring you up-to-date news, in-depth features on musicians and reviews for the latest CD releases. We also travel to the front lines for all local festivals including Canadian Music Week and North by Northeast. Don’t forget to check out our Facebook and Twitter pages for all daily Spill updates.
RELATED ARTICLES
ace frehleyalbum reviewalbum reviews
7.0

by Jamie Lawlis on October 19, 2018
Ace Frehley Spaceman Entertainment One Music There have been many comebacks of sorts in Ace Frehley’s 45-year-long career. The new album, Spaceman, is not a comeback in terms of KISS [...]
6.0

by Gerrod Harris on September 8, 2017
Ace Frehley Anomaly eOne Music Back in 2009, Ace Frehley released Anomaly.  Not only was the record very well received among critics, but it was Frehley’s first solo record since his 1989 [...]