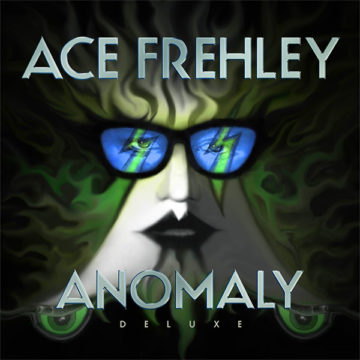 Back in 2009, Ace Frehley released Anomaly.  Not only was the record very well received among critics, but it was Frehley’s first solo record since his 1989 release, Trouble Walkin’, making the album that much more of an exciting affair.  Anomaly allowed for The Spaceman to demonstrate his own musical prowess as a solo musician in the twenty-first century. It was, however, of little surprise that Anomaly would be such a great record, after all, Frehley was the lead guitarist for Kiss throughout the 1970’s- a time where they were most influential- and has already embarked on a short lived but successful solo career. Since then, Frehley has also released Space Invader in 2014 and most recently Origins, Vol. 1, a cover album which saw Frehley take on classics by artists of the likes of Cream and Jimi Hendrix.  Now, Frehley has reissued Anomaly with the addition of three new tracks as he credits the record with the revitalization of his career and sought to release it as he originally envisioned it.

Anomaly is by no means a bad album.  The album features some great rock as well as excellent lead vocal and guitar performances form Frehley. That being said, the album is very much inspired from the classic rock greats of the 1980’s, which made the album sound old in 2009.  Now, Anomaly has not aged as well it should have. Despite that, songs like the crunching “Foxy & Free”, the now extended “Space Bear” (a very welcome extension), and “Outer Space” are among some of Frehley’s strongest from his solo career.

If this was only a review of the original release, Frehley’s Anomaly would get a seven out of ten. However, this is not the case as this review also must take into account the reissue and additional content of the album. The first of the three new tracks is “Hard For Me”, a demo for what would become the album’s opening track, “Foxy & Free”.  Instrumentally, the two versions of the song are very similar, only the recording quality differs. The lyrics however are much more sexually charged- in some moments, even aggressive- and are far cheesier than they were in “Foxy & Free”. The following track is a demo and slower version of “Pain In The Neck”. Demos of this sort are always very interesting to listen to as it is like a peek behind the curtain that hides the creative process and this version of “Pain In The Neck” is no exception. The third and final of the bonus tracks is “Return Of The Space Bear” a song that is only partially new as it was previously available through iTunes with the purchase of Anomaly. “Return Of The Space Bear” is a cool song and a worthwhile incentive to purchase the original record digitally, but where it is likely that a majority or at least a significant amount of the original Anomaly sales were digital, that makes “Return Of The Space Bear” feel far less of the bonus track that it once was.

While there is no doubt that Anomaly was and still is a solid hard rock album, the reissue of the record is far less than exciting.  With only three new tracks- two demos and one song that was previously available digitally- there is not much new going on to justify purchasing the album again.  Furthermore, the lack of an anniversary behind the intent of reissuing Anomaly makes this feel less genuine of a release and more of a Gene Simmons inspired get rich quick scheme (remember when he wanted to patent the devil horns hand gesture? Not cool, Gene, not cool).  Regardless, Anomaly still holds up as a good classic rock record in a modern age- albeit a touch dated- eight years later and the additional tracks are well done, making the reissue of Anomaly a great album for first time listeners and Frehley super fans alike.

A passion for music has always been a part of Gerrod’s life. As a young boy, he was raised on a steady diet of the music from The Chili Peppers, Aerosmith, The Stones, Prince, and others from his mum. Raised in the GTA, Gerrod continued to foster his love for music by attending a wide range of concerts and learning the drums. His unapologetic passion for music has no bounds and has spread to a wide variety of styles, whether it be the 90’s rock that sound tracked his teenage years, the jazz he studied in university, or his newfound love for hip-hop. He recently received his bachelors in music and education from York University and is passionate about writing and reviewing good (and less than good) music. Gerrod is also the drummer and songwriter for a Toronto based rock & roll band, One In The Chamber.
RELATED ARTICLES
ace frehleyalbum reviewseone music
9.0

by Contributing Writer on September 18, 2020
Ace Frehley Origins Vol. 2 eOne “We’ve got a little surprise for you tonight! We’re gonna turn the microphone over to Ace Frehley,” Paul Stanley famously declared on Kiss’ Shock Me [...]
7.0

by Jamie Lawlis on October 19, 2018
Ace Frehley Spaceman Entertainment One Music There have been many comebacks of sorts in Ace Frehley’s 45-year-long career. The new album, Spaceman, is not a comeback in terms of KISS [...]