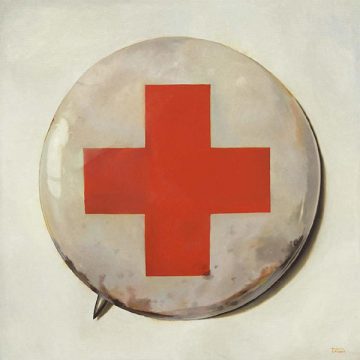 Empty Horses, the seventh solo album from Tobin Sprout, takes a stylistic detour from what we are used to by someone regarded as a prince of fuzz-laden indie rock. With his latest record, we are treated to Sprout’s turn to gentle and pensive folk music which, at times, borders on country. While it is unexpected, it is certainly not unwelcome.

Although not strictly intended as a concept album, Empty Horses is neatly thematically consistent. Songs about faith lost and regained, death, and justice are structured around a loose focus on the American Civil War. The heart of the album, “On Golden Rivers”, with its military drumbeat and references to ranks of blessed troops, provided a focal point during recording that pulls the whole project together. “Antietam”, named for the battle of 1862, offers the most explicit reference to the war, told from the point of view of a Union soldier.

Given the tempestuous nature of this year felt around the globe, and especially in America, it’s appropriate that Sprout puts the country’s history under a microscope. However, the seeming simplicity of the past is not romanticized, and the uncertainty of the present remains under scrutiny.

Despite the departure from what has come to be expected from Sprout, there are still fragments of his familiar tropes on this record. Scattered among the orchestral, melancholic ballads are tracks that get the job done in one and a half minutes. “Wings” and “No Shame”, the opening and closing tracks respectively, are sparse–just Sprout and a piano–and highlight how emotive his vocals can be. In contrast to this, the title track finds Sprout leaning into a flirtation with becoming a country singer that makes suppressing a grin nearly impossible.

Empty Horses is a fleetingly beautiful record. It serves as further proof of how much Tobin Sprout is capable of accomplishing in such a short space of time.

Kirsten Inneski was born and raised in Scotland but fled to Canada in 2016, settling in Toronto in order to have the opportunity to see bands who rarely, if ever, make it to the UK. If her mum asks, however, the official party line is "Kirsten moved 3000 miles away from everybody she knows and loves for the totally rational reason of pursuing career in her field of TV production". Inneski writes, daydreams about making music videos she will never have the budget for* and obsesses over music and comedy, all while trying to make pals with everybody.*Eccentric billionaires can hit her up on Instagram.
RELATED ARTICLES
album reviewalbum reviewsfire records
9.0