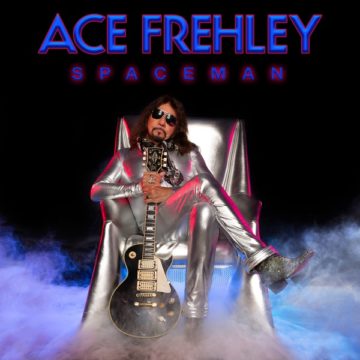 There have been many comebacks of sorts in Ace Frehley’s 45-year-long career. The new album, Spaceman, is not a comeback in terms of KISS fans because he has been putting out plenty of music to keep the fans in close reach. I hope this album goes beyond the fans and into the ears of Baby Boomers and Generation X-er’s who lost track of both KISS and Frehley, and wonder if their millennial children embrace a resurgence for the glory days of glam rock. If the kids are listening to Spaceman, they will receive a lesson in Rock ‘n’ Roll 101 while the old folks lament on days gone by.

The lead single and video, “Rockin’ With The Boys”, pays homage to “Beth”, a rare top 10 hit for KISS with Peter Criss singing out “Me and the boys will be playing all night”. Maybe Ace is missing the party that gave him a ‘buzz’ in the ’70s and now he singing about calling home, giving them a ‘buzz’ saying that he will be home soon.

“Bronx Boys” takes us into Frehley’s Irish street gang past that he relied on for protection as a child. He definitely paid his dues in a real-life gang called The Duckies. This ‘rougher side of life’ scenario counterpoints the Paul Stanley and Gene Simmons spoon-fed upbringing. Sometimes even Simmons backs up the claim that Ace could be the coolest member of KISS.

Speaking of Gene Simmons, he is on board here, co-writing and playing bass on a couple of tracks. Drummer Anton Fig is elsewhere on the album and is firmly in place as he once played on Frehley’s 1978 solo debut, an album that he wants to play in its entirety at this year’s KISS Expo in New Jersey. Frehley recently fired his band of many years in favour of Simmons’ solo band, whom he describes as younger, hungrier musicians. It could be the 12 years of sobriety that gave Ace Frehley the nerve to shuffle his orbit and fire good friends. Or could it all be found in his new cover of Eddie Money’s “I Wanna Go Back”?

Overall, this is a good album with a safe passage to a glorious past. Ace still wants to be at the party that once gave him a ‘buzz’ but like the song goes, he’s feeling so much older and he can’t go back and he knows it.

by Contributing Writer on September 18, 2020
Ace Frehley Origins Vol. 2 eOne “We’ve got a little surprise for you tonight! We’re gonna turn the microphone over to Ace Frehley,” Paul Stanley famously declared on Kiss’ Shock Me [...]
6.0

by Gerrod Harris on September 8, 2017
Ace Frehley Anomaly eOne Music Back in 2009, Ace Frehley released Anomaly.  Not only was the record very well received among critics, but it was Frehley’s first solo record since his 1989 [...]