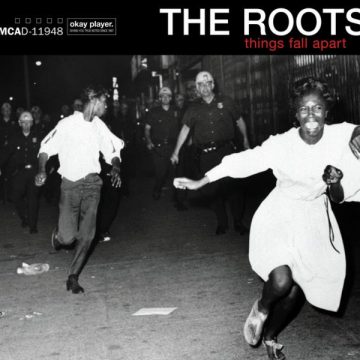 While the younger generation may only know them as the band backing Jimmy Fallon on The Tonight Show, The Roots remain among the strongest all-star hiphop bands in the history of the genre. Perhaps the best example of this, despite having a truly impeccable discography, is their landmark 1999 record, Things Fall Apart. Now, in honour of the 20th anniversary of the album, The Roots are reissuing it, remastered and with the addition of 10 bonus tracks.

Opening with the familiar sounds of the tone-setting introduction skit, “Act Won Things Fall Apart,” it is clear that Things Fall Apart remains a classic for both The Roots and for hip-hop as a whole. The lo-fi, fuzzy jazz of “Table Of Contents Parts 1 & 2,” followed by the tight-snapping groove of the second half of the track, is both nostalgic and innovative, even two decades later. Within just two tracks, “Things Fall Apart” already stood apart from the hip-hop of the time and clearly remains distinct even now. Over the course of 18 songs, including highlights like “Dynamite,” “Without A Doubt,” “You Got Me” (featuring Erykah Badu), and “Double Trouble,” Things Fall Apart remains untouchable.

The 20th anniversary edition also comes with 10 bonus tracks, many of which have been previously released on rare or limited releases and have not been available digitally before. Some of these include live tracks– some of the finest of the bonus material, as The Roots put on one of the best concerts you’ll see. Included are also remixes and unreleased tracks that were cut from the original Things Fall Apart.

Of the unreleased material, “Table Of Contents 3 Extended Intro” kicks things off with what could have been a third segment to the album’s opener, providing an uptempo bop. Like the rest of the material on the album, it is pure gold. Similarly, “Quicksand Millennium” was also cut from the original Things Fall Apart, and aside from the fact that the record was already running long, one can’t imagine why this track didn’t make the final cut. Aside from these and the live tracks, however, the rest of the bonus material feels less exciting and interesting as the rest of the album.

Upon its original release, Things Fall Apart immediately stood out as an incomparable master class in both hiphop, jazz fusion, and funk. Not only was it a definite step up from the band themselves, but in a year dominated by rap artists like Eminem and Dr. Dre, it was a record unlike anything else in the musical climate of the time. The same remains true of the album, and of The Roots, 20 years later. What Things Fall Apart 20th Anniversary Deluxe Edition perhaps demonstrates best is the utter timelessness of the album and how The Roots are still one of the most unique hiphop acts ever – whose musical innovations have forever changed the genre.

A passion for music has always been a part of Gerrod’s life. As a young boy, he was raised on a steady diet of the music from The Chili Peppers, Aerosmith, The Stones, Prince, and others from his mum. Raised in the GTA, Gerrod continued to foster his love for music by attending a wide range of concerts and learning the drums. His unapologetic passion for music has no bounds and has spread to a wide variety of styles, whether it be the 90’s rock that sound tracked his teenage years, the jazz he studied in university, or his newfound love for hip-hop. He recently received his bachelors in music and education from York University and is passionate about writing and reviewing good (and less than good) music. Gerrod is also the drummer and songwriter for a Toronto based rock & roll band, One In The Chamber.
RELATED ARTICLES
album reviewalbum reviewsthe roots
8.0