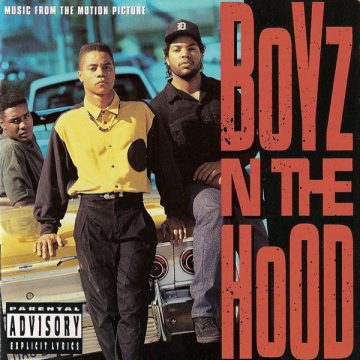 In 1991, John Singleton directed his first feature film Boyz N The Hood.  It was a rare and truthful look into the chaotic world of south-central Los Angeles.  The inner-city drama garnered Singleton an Academy Award nomination for Best Director.  He was the first African-American nominee in that category and the youngest at 24 years old.

Now the soundtrack for this culturally significant film gets its first vinyl reissue since its original pressing over 25 years ago.  Qwest/UMe is releasing a double vinyl in two colour variations: a translucent blue and black.

The soundtrack is a perfect mix of early ‘90s gangster rap, R&B, jazz, and funk.  The soundtrack starts with an immediate punch in the face in Ice Cube’s honest hard hitting “How To Survive In South Central,” a guide for the unassuming traveller who may wander into the area. A straight-edged narrator directs you to follow instructions while Cube drops knowledge about the landscape on top of a bouncing funk bassline.

Bookended at the end of the compilation is the first-time vinyl edition of the powerful Stanley Clarke track “Black On Black Crime.”  This amazing instrumental combines a strong beat, slap bass accents, and a sax line that rips through the song with grand emotion.  Clips of Lawrence Fishburn’s neighbourhood speech flicker throughout the track echoing the important message of the film.

Other standouts include Tevin Campbell’s “Just Ask Me To” to the Tony! Toni! Tone! slow jam “Me & You” and Quincy Jones’ sultry “Setembro.”  This album is a must for any collector.

A native to Toronto, Mark has spent his time on this earth swaying to decades of live music in dark and dirty venues. When not writing or collecting a massive amount of vinyl, he enjoys travelling and photography. His hobbies are tolerated by his lovely, patient wife and beautiful daughter.
RELATED ARTICLES
album reviewalbum reviewsume
9.0