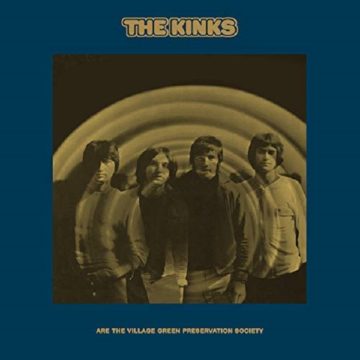 In November, 1968 The Kinks released The Kinks Are The Village Green Preservation Society, an album that is now considered a classic but at the time failed to chart in the U.S. or the U.K. Perhaps The Beatles’ The White Album, which came out the same month, overshadowed it, but the fact is, the album did not sell upon release. In truth, at that time The Kinks were known as a singles band and their albums did not chart as well as their singles. But never let chart positions inform you about an album, as what we have with The Kinks Are The Village Green Preservation Society is one of the greatest albums ever made. But before we get there, some more history about this landmark album.

So here we are 50 years later, celebrating its 50th anniversary with a massive rerelease of that album. The box set features a double album on vinyl, featuring the original mono and a remaster of the stereo version. Also included is the 12-track Swedish version. Then there are the five CDs. The brilliant Andrew Sandoval has remastered the original stereo album and has done an excellent job. You will find this on CD one, along with rarities, B-sides, and singles. CD two is the same, except here, we have Sandoval’s mono remaster. Sounding pretty damn good. To my ears, it actually sounds better in mono. The music featured on CD three is alternative versions and backing tracks, which are interesting, and CD four is a live BBC radio as well as television broadcasts (audio only), along with interviews and other tidbits. It is proof that, in the U.K. anyway, The Kinks worked hard at promoting this album. Finally CD five features post The Kinks Are The Village Green Preservation Society songs, mainly from the 1970s, but there is a live recording by Ray Davies from 2010. There are also some rare mixes as well as a previously unreleased song, the stunning “Time Song”. Throw in three vinyl singles and a beautiful book, and there you have a box set to celebrate the 50th anniversary of this brilliant album.

But what about the music, you may ask? First, keep in mind that this is the classic Kinks lineup — Ray Davies (guitar and vocals), Dave Davies (lead guitar and vocals), Peter Quaife (bass and backing vocals), and Mick Avory (drums and percussion). Joining them on this album is the great studio musician Nicky Hopkins on piano and keyboards, and Ray’s then wife, Rasa Davies providing some background vocals. It was their sixth studio album, and when they released their next one, (Arthur or The Decline and Fall Of The British Empire), Quaife would leave and The Kinks began a bit of a revolving door of musicians joining and leaving the band until they called it a day in 1996.

The Kinks Are The Village Green Preservation Society is meant to be listened to in its entirety. It is not a collection of singles, but a cohesive, concept album. It is about loss and finding a special place where memories can come to life, and you can be transported back to another time and place and be with those whom you miss. It is the loss of a way of life one has become accustomed to. The title track stands up for everything one holds dear in their childhood and the album moves on from there. But Davies is quite clear about his view of change:

“Preserving the old ways from being abused,
Protecting the new ways, for me and for you,
What more can we do?”

Ray Davies, who wrote the album, came up with characters, citizens of The Village Green perhaps, and it is some of his finest writing of the 1960s. “Do You Remember Walter”, “Johnny Thunder”, “Wicked Annabella” and even “Phenomenal Cat”. It is a brilliant album, and why it was not a huge hit at the time is beyond me. The previously unreleased song, “Time Song” would have fit perfectly. It is one of the best things I have heard from The Kinks, thank goodness it has finally surfaced.

“Suddenly it’s too late,
Time has come and it can’t wait,
There’s no more time.”

I can tell you it brought tears to my eyes, and Davies’ ever so gentle voice singing it, well, it is as near perfect as a song can get. It is a peaceful album that deserves your attention and should be listened to from beginning to end in one sitting. As for the bonus material, is it all essential? No, but it is interesting and in some cases a welcome addition to the collection. The box set will only appeal to fans but the material is well worth a listen if you consider yourself a Kinks fan. The live CD is exciting and one gets the sense of what the band could have done on stage with the album in 2018. The mixes and alternate takes are interesting, and sometimes you find yourself playing “‘spot the difference” but when you get to hear a song like “Days (Acoustic Version)” and the “Home Demos Medley”, then yes, it becomes essential, very essential. It is also a glimpse behind the curtain to see how this album was made.

There is a lot on this box set, a lot to absorb and a lot to listen to, but it is never a chore to do so. Sandoval and The Kinks have put together a wonderful tribute to one of the most underrated albums of all time and perhaps the time is now to enjoy it. Better late than never. God save The Kinks!

Born and raised in Whitby, Aaron discovered music through his love of The Beatles. This led to a career in radio, writing for various publications, and ultimately a radio show about The Beatles (Beatles Universe), which ran for over four years. When not immersed in music, Aaron enjoys spending time with the loves of his life -- his wife Andrea, and daughters Emily and Linda (all of whom have an intense love of music too).
RELATED ARTICLES
album reviewalbum reviewsthe kinks
9.0