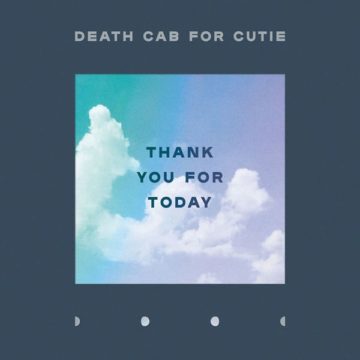 Death Cab for Cutie
Thank You For Today
Warner Music

Into their second decade of making music, Death Cab for Cutie’s Thank You for Today is a testament to a band whose career boasts a vast catalogue of poetic lyrics mixed with sun spotted and emotionally heavy sounds.  In line with much of the band’s discography, this album doesn’t provide fans with a huge amount of new experimentation from but rather a sound that shows their confidence in leaning into what makes them uniquely Death Cab.

The opening song, “I Dreamt We Spoke Again” almost sounds a bit more like Postal Service than Death Cab for Cutie with quirky-sounding keyboards, bright and slow.  With melancholy vocals over top, the song melts easily into the next.

From here, the focus shifts to Death Cab’s always impressive lyrics. “Summer Years” has the feeling of a fading summer at the end of August with lyrics that tap into immense longing and regret. Lead vocalist and guitarist Ben Gibbard’s voice gently sings “And I wonder where you are tonight/ if the one you’re with was a compromise.”

Following up, the third track is also the band’s first single off Thank You for Today. Demonstrating a bit of a stray from their usual style (perhaps more than the rest of the album), “Gold Rush” is a bit more upbeat and easy to listen to.  It’s definitely a windows-down type of tune.

Themes of love-lost and longing aren’t few and far between on this album.  “Autumn Love” describes a love that’s simply not enough to sustain with loads of comparison to the surrounding world:

“No more lighthouses to deceive me
Just leave me floating on the open ocean
And let the moonlight take me anywhere on a tidal flow
And if I capsize it’s alright
Cause I’ve been feeling to invincible”.

Simply put, the lyrics on their own are a poem and once completed with easy-going guitar and back beats, they’re all the more magical.

Overall, Thank You for Today is an homage to broken hearts, pining, and love bigger than circumstance.  Instrumentally sound and not overly complicated, it’s an exceptional addition to an already fantastic body of work from Death Cab for Cutie.

Gabrielle Mueller is a lover of all things music, writing and charcuterie boards. Gabrielle has a particular passion for music of the 1960s and the hippie movement in Toronto’s Yorkville district. Gabrielle runs her own music website, The Hippie Historian, where she reviews concerts, interviews musicians and writes about music history that spans the ages.
RELATED ARTICLES
album reviewalbum reviewsdeath cab for cutie
8.0