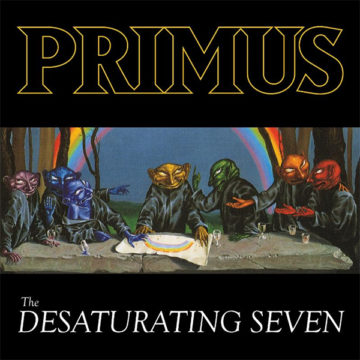 Whilst being apropos, I was certainly skeptical of a new Primus album that is entirely inspired by a children’s book. I’ve always enjoyed the dark side of Les Claypool’s writing; the social commentary, the dark humour. Well at least it’s about goblins, so let’s give it a whirl.

Track one, “The Valley,” didn’t do much to get me amped up. Effect-laden and meandering, it opens up with a grumpy-old-Brit sounding narration (Is that you Les?) regarding said Goblins and the Valley of the Rainbow. Hmm… Next.

As I listen to more tracks, they become longer (from three minutes to almost eight minutes long) and I’m NOT getting bored. The tones get thicker, the funk gets funkier and the melodies remain complex and interesting without stealing away from the more monotone and necessary chunks of funk. Since there are only seven tracks, I went into this listening experience with high hopes of epic-ness, and the original Primus lineup certainly delivered here. Traditionally Primus albums would have one or two epic and beautiful journeys into pot-induced musical virtuosity. The Desaturating Seven is the inverse of that tradition, with the entire fat and juicy middle housing intense, lengthy and complex compositions.

The production initially left something to be desired for me. It definitely sounds like the boys chilling at ‘Rancho Relaxo” (Les’ home recording studio) and has more of an EP feel thanks to that. However at second and third listen, I felt it growing on me, like so many creepy Primus albums of days gone by. The lack of “big-record-deal” compression just made me want to crank it up louder. The rhythms are just too good to ignore.

Something else feels different about this album, something a bit more subtle. Ler Lalonde’s guitar work on this particular collection of music is simply perfect. It blends so well with the music, the tones, the textures and the melodies, Mr. Lalonde is supporting the music in an incredibly precise and elegant way. It is a thing of beauty.

It’s great to see Tim Alexander back on the skins, and as always he makes mind-blowing drumming appear effortless. The group really seems to have matured in some ways. This album will be on my playlist for some time, and inspires me to dig back into the old catalogue. It is without a doubt, CLASSIC Primus. They should have named this album “The Big Tease”, because now I am jonesing for this lineup to put out a full-length album. Go ahead and give The Desaturating Seven two or three listens, and it will probably turn into twenty or thirty more.

James Stefanuk has an unbridled passion for good original music. He has been involved in the Toronto Indie scene for over a decade, and currently fronts the Alt-Blues band 'Jim Dan Dee'. In his spare time James plays with his Australian Shepherd 'Indie', drinks bourbon on the rocks and writes about himself in the third person.
RELATED ARTICLES
album reviewsato recordsprimus
8.0