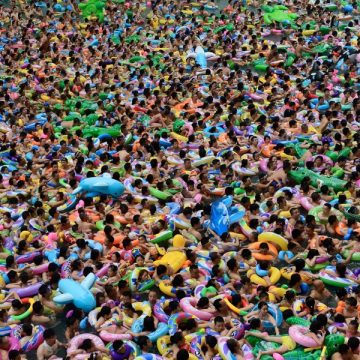 Manchester-based quartet elbow have been crafting songs and soundscapes of such warmth, honesty, and poetry as to be almost beyond description for two decades. Built around both the incredible instrumentation of band members Mark & Craig Potter and Pete Turner, and the glorious timbre of lead singer Guy Garvey, elbow have long been one of the clearest examples of putting aside egos in the interests of creativity. Their eighth album, 2019’s Giants of All Sizes sees them at the very peak of their powers, having spent time in the studio recording live together as well as in isolation, exercising their own creative muscle before integrating those ideas into the greater concept of the album as a whole. As with 2008’s Seldom Seen Kid and 2014’s The Take Off and Landing of Everything, the end result of the band’s creative approach is something hard to nail down in something so clumsy as the written word – Garvey is famous for the depth and breadth of his writing, just as he is with his remarkable vocal prowess, but it may just be that on Giants of All Sizes, that it is the music that steals the show.

There is no question that Giants of All Sizes is a bit of a departure from previous work, or perhaps even a return to their very early releases, in that the tone is decidedly darker and more pessimistic. Given the realities of post-Brexit, uber-conservative England, this is perhaps little surprise, but as is always the case with elbow’s work, the authenticity of their music cannot possibly be overstated. These are songs that tell less of the complexities of human emotion and more the frustrations of the current human experience, measured not just in the poetry of Garvey’s lyricism but also the dynamic shifts and heaviness of mood that surround those lyrics. “White Noise White Heat” uses horns, strings, and bass to punctuate the ease with which Garvey has become disenchanted with his present reality, “born with a trust that didn’t survive”, his positivity and optimism “beaten out of” him; on the Beatlesque “Doldrums”, Garvey’s confusion is echoed beautifully by the steady tumble of the percussion and doubled vocals. Then there is the stunning, gut-wrenching, grit-in-the-teeth “The Delayed 3:15”, Garvey’s account of an unnamed man’s suicide on the train tracks, his all-too-brutal emotional connection to the man, and the damning of a society uninterested or too quick to look the other way, the victim truly “just another man whose blues stopped his heart beneath our shoes”.

While the leanings may be those towards bleakness and perhaps even loss, all is not truly beyond hope, a fact made abundantly clear on the album’s closer “Weightless”. A song seemingly built around the parallels between the birth of Garvey’s son and the loss of his father ticks all the boxes as a classic work of beauty by this abundantly talented, emotive band – the guitar tone, the hypnotic pulse of the keys, the layered vocals, all of it speaks to the listener in a way that simply cannot be ignored. “Seven Veils”, though much less lyrically positive or uplifting, also doubles down on atmosphere and percussive movement, the end result being a classically memorable elbow tune.

A much-celebrated band capable of crafting moments of incredible beauty has not turned its gaze quite completely away, but this study of pessimism and doubt, loss and confusion, truly life in all its complexities, somehow still ends up feeling like a breath of much-needed fresh air.

Br. lives in southern Ontario, grew up on The Beatles and The Journeymen, spent his adolescence immersed in grunge, and his adulthood in British alternative. His greatest joy is seeing his son dance and grow into his own appreciation of the indescribable joy of music...
RELATED ARTICLES
album reviewalbum reviewselbow
8.0