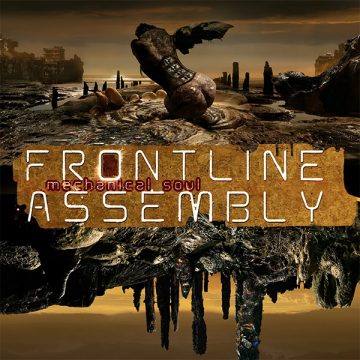 10 tracks, plus a remix of  “Hatevol” from their previous album Wake up the Coma, has everything you would expect from Bill Leeb and Rhys Fulber: a Front Line Assembly album with multi-layered diverse sounds of synth-driven electro-industrial.

“Purge”, the first track, is a good intro that launches you into that familiar territory, but lacks the ‘wow’ factor that would build the anticipation for the following tracks. Don’t get me wrong, the song is attention-getting with a good tempo, but not a standout track.

The tempo continues with “Glass And Leather”. Lyrics are minimal, and there’s nothing wrong with that. However, it’s a six-minute-long song and gets a little long-winded by about the four-minute mark.

“Unknown” is an dystopian-themed, upbeat song. With Bill Leeb’s breathy vocals and a Depeche Mode tone to it, it has the potential to grow on you, which is why it’s not surprising it was chosen as the first single off the album.

“New world” has a slow, calm tone to it while “Rubber Tube Gag” carries a darker, sinister mood.

Industrial metal guitarist Dino Cazeres of Fear Factory (who Fulber has produced for) contributes a crunchy guitar riff to “Stifle” while Front 242’s Jean-Luc DeMeyer provides vocals on “Barbarians.” Their contributions add exciting elements to the songs and make them highlights of the album.

Altogether, the songs form a good cohesive album that flows well but has enough variety so that it doesn’t get boring despite the fact that most of the songs run over five minutes.

Front Line Assembly has always been credited with being diverse, and you will certainly get that with this album.  A very appropriately-named album, Mechanical Soul helps secure Front Line Assembly’s status as influential legends in the electro-industrial industry.

Trista’s a music addict who’s taste in music spans over numerous genres. She enjoys playing her bass guitar, but honestly she’s not very good at it. So she goes to concerts and watches real musicians who are far more talented than her. You’ll find her there in the front row, because, well, she’s short and wouldn’t be able to see the stage very well otherwise, and because she strives to get the perfect photo to capture the experience.
RELATED ARTICLES
album reviewalbum reviewsbill leeb
8.0