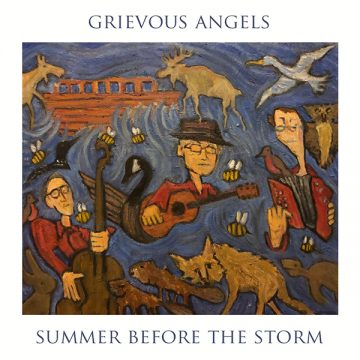 The Grievous Angels made their debut in 1986, and The Summer Before The Storm, their eighth album, is their strongest to date. The band has help here from special guest, Skydigger’s Andy Maize, whose work with the Grievous Angels is a long time coming because it is a natural fit.

The album kicks off in style with the rocking, almost rockabilly, “The Morning After”. It quickly shifts to more traditional Canadiana with the second track, the beautiful “All Night Depanneur”, which is an aching song of loss, written much like a novel with very descriptive verses. Frontman Charlie Angus and Maize trade vocals and harmonize throughout, which adds a great deal of depth and texture. Elsewhere, Mercier duets with Angus on the folky “Mile Out Of Kirkland”.  Again, the combination of the voices is stunning, and brings a great deal of emotion to the song. It also features a great refrain, “a mile out of Kirkland/the world was burning down.” It takes great skill to tie politics into an accordion-flavoured folk love song.

The album, musically, is all over the map. Cajun, rock, folk, but most importantly, the album rocks and is full of energy. What one hears is a band of musicians enjoying themselves, while writing about very serious subjects. Angus is still a member of Parliament, so it is understandable that the album would be on the political end of the lyrical spectrum. The songs address such themes as conspiracy theory, climate crisis, PTSD,  and violence. It was recorded on the eve of the pandemic, and even still, it is pretty heavy.

For my money, the Grievous Angels have made far too few albums. Luckily, we have this album, chock full of brilliant music, strong lyrics, and the welcome addition of Andy Maize and Janet Mercier. The Summer Before The Storm is a brilliant folk album, and one for our times.

Born and raised in Whitby, Aaron discovered music through his love of The Beatles. This led to a career in radio, writing for various publications, and ultimately a radio show about The Beatles (Beatles Universe), which ran for over four years. When not immersed in music, Aaron enjoys spending time with the loves of his life -- his wife Andrea, and daughters Emily and Linda (all of whom have an intense love of music too).
RELATED ARTICLES
album reviewalbum reviewsandy maize
8.0