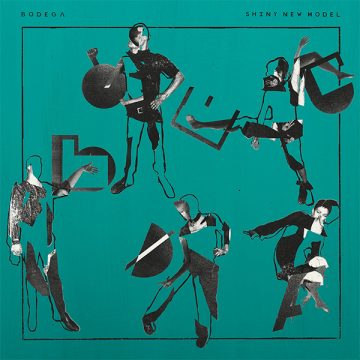 New York-based Bodega’s have released a brand-new EP Shiny New Model.  It is a worthy follow-up to the genre-fluid five-piece’s 2018’s Endless Scroll, which was relentlessly quirky and sarcastic. It was characterized as much a punk album as it was “art rock” – that vague descriptor which seems to be used for any album that either resists the packaging of traditional music genres or comes from a young band based in New York. Regardless, their first album was a phenomenal debut, featuring many NYC references and focusing on the struggles of youth, all driven by a unique blend of folk, punk, and grunge sensibilities.

With Shiny New Model, the band have shifted their lineup, beefing up the rhythm section, which has allowed them to re-imagine their already omnivorous sound with very impressive results.

While the direct, somewhat nihilistic storytelling of the EP’s first track “Shiny New Model” would fit comfortably on Endless Scroll, the second track is a bold step in a different direction. “Treasures of the Ancient World” is not only totally irresistible in terms of the new rhythm section propelling the song forward, but it also features excellent vocals from frontman Ben Hozie. While on Endless Scroll his vocals often sounded somewhere between spoken word and punk snarl, here he sings clearly and with an incredibly smooth timbre.

The four tracks that follow are as much snippets as they are fully fleshed-out songs, each one channeling the bands more direct, sarcastic approach to storytelling and song construction.

The EP rounds off with two very different approaches to the same song. Surf rock-infused “Truth is Not a Punishment” is an audience favourite, especially as the band often use it to experiment with sound, jamming for extended periods during live shows.

On Shiny New Model they make an attempt at recording the song’s experimental improvisation, with the end result being a monster of a song in excess of ten minutes. More notably, it features at least one obviously joyful moment for the band as Hozie laughs while delivering a line about being unable to remove a seat belt fast enough. The follow-up is a more radio-friendly version of the same song, sans improv.

Bodega was already a band capable of crafting infectious, witty stories and wrapping them within a myriad of authentic soundscapes. With Shiny New Model, the band has taken another step forward by beefing up the sounds that propel each song. To say this is reason for excitement would be a huge understatement.

Br. lives in southern Ontario, grew up on The Beatles and The Journeymen, spent his adolescence immersed in grunge, and his adulthood in British alternative. His greatest joy is seeing his son dance and grow into his own appreciation of the indescribable joy of music...
RELATED ARTICLES
album reviewalbum reviewsbodega
8.0