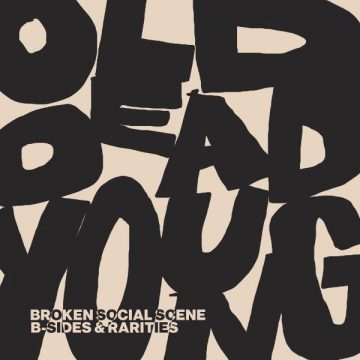 It’s been almost five years since Broken Social Scene have released any new material, and though Old Dead Young is far from new, it quells the thirst of those who are thirsting.

For the last two decades Broken Social Scene have been pushing against the boundaries of genre, releasing albums full of challenging, beautiful, chaotic, and anthemic tunes. Their second release, You Forgot it in People was unlike anything I’d heard before. In the years since, BSS’s founders, Brendan Canning and Kevin Drew, along with a 19 strong evolving rotating cast of guest musicians have been adept at reinventing themselves with each recording.

Old Dead Young, while feeling much like a standalone album, is in reality a career spanning collection of unreleased tunes collected from the last 20 years.

While many B-sides albums can feel like a muddy soup of wildly different ingredients, Old Dead Young has been woven together with the care you’d normally find in a solid new release.

“This House Is On Fire”, an outtake from 2010’s Forgiveness Rock Record is typically in form subtle beauty. “National Anthem of Nowhere” which originally is a demo for guitarist Andrew Whiteman’s Apostle Of Hustle project, stokes the need to move to music, and is such an uppity little tune that even my pet bird goes mental every time it plays.

Much of Broken Social Scene’s catalogue can pull up emotional stuff from the depths, given their emotive, soundtrack-like style that defies category, sometimes feeling like breakup music while at other times feeling like a first kiss.

While this isn’t an excellent release or a swathe of new material, it’s a few pounds of flesh to chew on, and a lot of it is certainly far from being castaway material. While it may not sway new listeners it is an interesting collection of polaroids that will likely keep old fans satiated.

It took the recommendation of a best friend to get me into the pages of music magazine writing. Armed with the deepest appreciation for all the music, a ridiculous sense of humour, and the apparent ability to string a few words together, these fingers started giving. Who knew it would become one of my favourite things many years later and that I'd enjoy seeing my works published the world over?!
RELATED ARTICLES
album reviewalbum reviewsarts & crafts
8.0