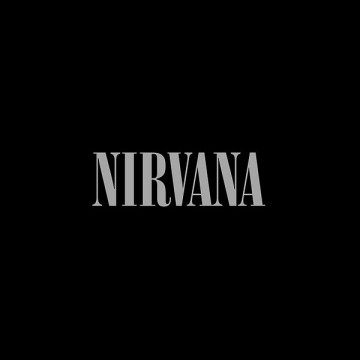 Nevermind the Bleach In Utero, Nirvana!

And here it is, Nirvana’s 2002 posthumous self-titled collection that was swimming in legal troubles, parties fighting with each other, and further distractions. This interesting collection of tracks include “You Know You’re Right,” which was recorded during Nirvana’s last ever studio session and just before Kurt Cobain’s death. Dave Grohl’s killer drum chops highlight the song with Cobain’s primal vocals, resonating levels of anguish and fury. But we wonder, should this have been the first song, or the last song on the release? The album storms onward with the two-chord blueprint of “About A Girl” to the cranking four-chord guitar onslaught of the rowdy “Smells Like Teen Spirit.” Later, the religious/suicidal “Lithium” parallels the soft-to-loud template of “Smells Like Teen Spirit.” The contrasting verses and chorus give a dynamic complexity to these songs. Krist Novoselic’s smooth bass riffs highlight the more upbeat “Been A Son.” It still resonates relevancy to this day with its lyrics dripping towards an argument against sexism.

The underrated melodic structure of  “Sliver” talks of parent desertion, as Dan Peters takes the drums. Trivia-wise, this song was an inspiration for Weezer’s “Heart Songs.” The track “Come As You Are” is filled with “I am the Walrus”-like confusion with contradictory and confusing lyrics. Furthermore, Nirvana evaded being sued for this song, even though they’ve admitted that the opening chords were a slowed-down version of Killing Joke’s 1985 song “Eighties.” To add to the hilarity, Killing Joke ripped their opening chords from The Damned’s “Life Goes On” (1982). The instrumentals are at the forefront again with Grohl’s high-energy drum assault on “In Bloom,” which leads into the haunting, depression-laced “Penny Royal Tea.” Throughout this album, Cobain’s versatile vocals, dripping with angst, are hauntingly jaded as his prose hits a varied spectrum of drugs, nihilism, tarnished relationships, the alienation of youth, depression, female body parts, and more, giving the listeners a cornucopia of downtrodden emotions that can represent a wide variety of generations. “Heart-Shaped Box” shows the ominous power of Cobain’s imagery (a clinging sadness for children stricken with cancer) as we hear him drawl, “I wish I could eat your cancer when you turn black.” Just stunning. “Rape Me” continues the surreal imagery as one might misinterpret the title of this song, which really expresses empowerment. Cobain ponders whether the glass is half full or half empty in the “Lithium”-like paced “Dumb,” as the exquisite cello is again heard gracing a Nirvana song. The album ends with “All Apologies” and a cover of David Bowie’s “The Man Who Sold the World” from Nirvana’s Unplugged in New York. The sweet cello once again rears its mellifluous head in “All Apologies” and demonstrates an elegance of continued progressivism for the band, which may have taken some fans aback, but was welcoming.

Not only is this Seattle band’s name uber ironic (and iconic), but Nirvana’s self-titled album is a power chord grunge rock classic the band should be satisfied with. It’s quite impressive that having only made three in-studio albums in their short seven-year “blink of an eye” existence, that the trio of Cobain, Grohl, and Novoselic did in fact catch “lightning in a bottle” and became one of the most influential, seminal alternative rock / indie bands in modern history, whose impact clearly shows no immediate end.

Insert pretentious stuff about me here. I was born at a very young age. I am pretty, funny... without the comma. Easily distracte
RELATED ARTICLES
album reviewsnirvana
9.0