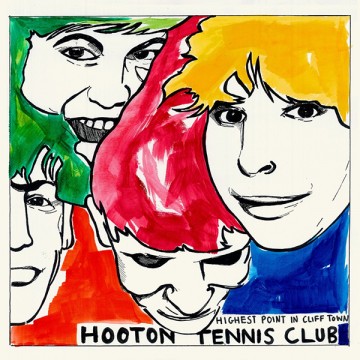 This fast-tracking, four-piece, poppy garage band from Chester, England are the toast of the town this past year, having gone from university studies to being signed by Heavenly Recordings in less than six months. If their band name (from a road sign for some tennis courts in Little Sutton) doesn’t tickle your fancy, then it’ll be their youthful energy that will make you want to listen to this 12-track album’s chops. Initially through this release, if you think their guitar playing or vocals aren’t polished, then you’d be right, and that’s the point, as the band believes in the unpolished rawness of doing things in their own way without a perfectly engineered sound. They don’t want to be perfect, as no one should expect a freshman album to be. But that doesn’t mean their lo- fi sound falls short. Their music is earmarked by frontman Ryan Murphy’s slow woodburning (at times), hypnotic vocals (with a few “whooos” along the way), as he adds a calming element to the songs. Guitarist James Madden’s lo-fi ascending/descending hazy, fuzzy sound mingles nicely with Harry Chalmer’s steady drumming. Callum McFadden’s adept bass playing rounds out the quartet’s infectious, upbeat, musical charm.

With pop-like toe tapping, carefree anthem songs like “Kathleen Sat On The Arm of her Favourite Chair,” “Something Much Quicker Than Anyone But Jennifer Could Ever Imagine,” and “Jasper,” Hooton Tennis Club litters their album with some carefully crafted casual tunes that show a straightforward melodic sensibility that is deserving of praise.

Coming from a wide variety of music genres that have historically entrenched Liverpool’s music scene, Hooton Tennis Club didn’t take a lot of risks instrumentally and vocally on this release, but having been inspired by Guided by Voices, the final product is definitely a game, set and match in the win column. Whether they have the consistency to evolve their casual pop sound into something more will be fun to watch in the upcoming years. Until then, enjoy this solid effort as it sits comfortably in your playlist.

Insert pretentious stuff about me here. I was born at a very young age. I am pretty, funny... without the comma. Easily distracte
RELATED ARTICLES
album reviewshooton tennis club
9.0