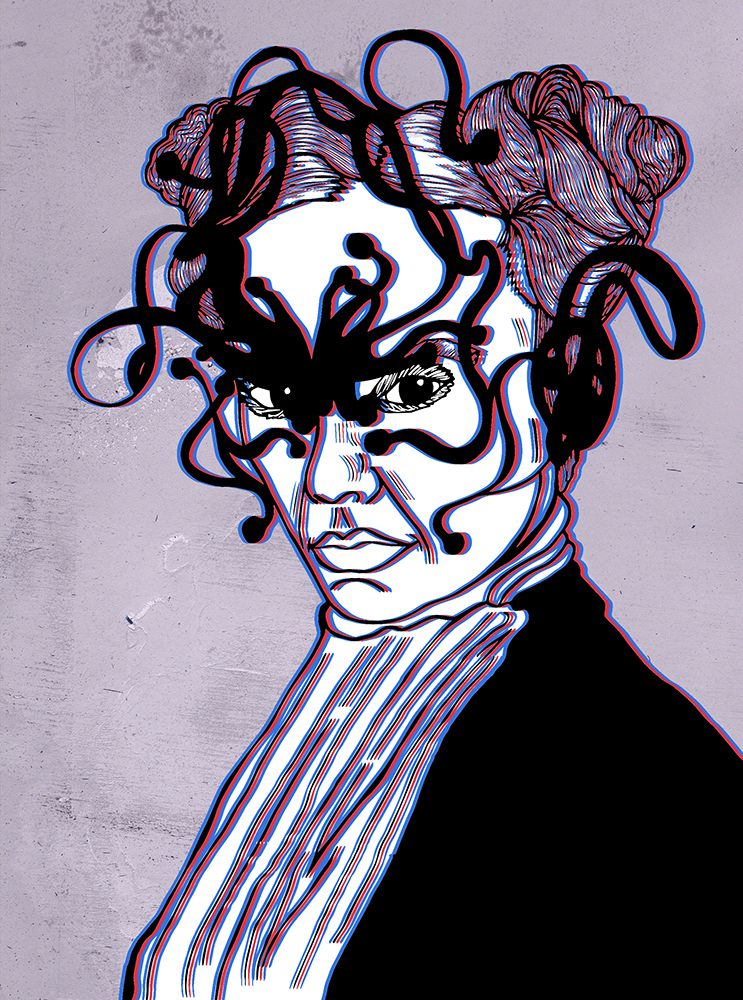 A visionary artist who effortlessly blends avant-garde and pop elements, Björk soon eclipsed the popularity of her former group the Sugarcubes when she launched her solo career after the group’s demise in 1992. Instead of continuing the band’s arty guitar rock pretensions, she immersed herself in dance and club culture, working with many of the biggest names in the genre, including Nellee Hooper, Underworld, and Tricky. Debut, her first solo effort (except for an Icelandic-only smash released when she was just 11 years old), not only established her new artistic direction, but it became an international hit, making her one of the most unlikely stars of the ’90s. In the the decades that followed, she remained at the forefront of musical innovation with albums like 2004’s vocal-based Medúlla and 2011’s science-themed Biophilia.

Though the title of Debut implied that it was Björk’s first-ever solo project, she had actually been a professional vocalist since she was a child. When she was in elementary school in Reykjavik, she studied classical piano and, eventually, her teachers submitted a tape of her singing Tina Charles’ “I Love to Love” to Iceland’s Radio One. After “I Love to Love” was aired, a record label called Falkkin offered Björk a record contract. At the age of 11, her eponymous first album was released; the record contained covers of several pop songs, including the Beatles’ “Fool on the Hill,” and boasted artwork from her mother and guitar work from her stepfather. Björk became a hit within Iceland and was not released in any other country.

Björk’s musical tastes were changed by the punk revolution of the late ’70s; in 1979, she formed a post-punk group called Exodus and, in the following year, she sang in Jam 80. In 1981, Björk and Exodus bassist Jakob Magnusson formed Tappi Tikarrass, which released an EP, Bitid Fast I Vitid, on Spor later that year; it was followed by the full-length Miranda in 1983. Following Tappi Tikarrass, she formed the goth-tinged post-punk group KUKL with Einar Orn Benediktsson. KUKL released two albums, The Eye (1984) and Holidays in Europe (1986), on Crass Records before the band metamorphosed into the Sugarcubes in the summer of 1986.

The Sugarcubes became one of the rare Icelandic bands to break out of their native country when their debut album, Life’s Too Good, became a British and American hit in 1988. For the next four years, the group maintained a successful cult following in the U.K. and the U.S. while they were stars within Iceland. During 1990, Björk recorded a set of jazz standards and originals with an Icelandic bebop group called Trio Gudmundar Ingolfssonar. The album, Gling-Gló, was released only in Iceland. By 1992, tensions between Björk and Einar had grown substantially, which resulted in the band splitting apart.

Following the breakup of the group, Björk moved to London, where she began pursuing a dance-oriented solo career. The previous year, she had sung on 808 State’s “Ooops,” which sparked her interest in club and house music. Björk struck up a working relationship with Nellee Hooper, a producer who had formerly worked with Soul II Soul and Massive Attack. The first result of their partnership was “Human Behaviour,” which was released in June of 1993. “Human Behaviour” became a Top 40 hit in the U.K., setting the stage for the surprising number three debut of the full-length album, Debut. Throughout 1993, Björk had hit U.K. singles — including “Venus as a Boy,” “Big Time Sensuality,” and the non-LP “Play Dead,” a collaboration with David Arnold taken from the film Young Americans — as well as modern rock radio hits in the U.S., and in both countries she earned rave reviews. At the end of the year, NME magazine named Debut the album of the year, while she won International Female Solo Artist and Newcomer at the BRIT Awards; Debut went gold in the U.S. and platinum in the U.K.

During 1994, Björk was relatively quiet as she recorded her second album with Nellee Hooper, Tricky, 808 State’s Graham Massey, and Howie B of Mo’ Wax Records; she also released a remix EP, co-wrote Madonna’s “Bedtime Stories,” and performed on MTV Unplugged that same year. “Army of Me,” the first single from Björk’s forthcoming album, was released as a teaser single in the spring of 1995; it debuted at number ten in the U.K. and became a moderate alternative rock hit in the U.S. Post, her second album, was released in June of 1995 to positive reviews; it peaked at number two in the U.K. and number 32 in the U.S. Post matched its predecessor in terms of sales and praise, going gold in the U.S. and helping her earn her second BRIT Award for Best International Female Artist. Post yielded the British hit singles “Isobel” (number 23), “It’s Oh So Quiet” (number four), and “Hyperballad” (number eight), yet her singles failed to make much headway on American radio or MTV. Late in 1996, Björk released Telegram, an album comprising radical remixes of the entire Post album, in the U.K.; Telegram was released in America in January 1997.

Homogenic, her most experimental studio effort to date, followed later that same year and spawned many remix releases in the next few years to follow. In the spring of 2000, she was named Best Actress by jurors at the Cannes Film Festival for her work in Lars Von Trier’s Palme d’Or-winning Dancer in the Dark. Selmasongs, her score for the film, reunited Björk with her Homogenic collaborator Mark Bell and arrived in the fall of 2000, just in time for Dancer in the Dark’s U.S. release. The full-length follow-up, Vespertine, was released one year later. She released a Greatest Hits collection and the Family Tree box set late in 2002. After performing a few dates in 2003, Björk geared up for a busy 2004, which included the release of her all-vocals and vocal samples-based album Medúlla and a performance of one of its songs, “Oceania,” at the 2004 Summer Olympics in Athens, Greece.

The soundtrack to Drawing Restraint 9, a film by multimedia artist Matthew Barney, arrived in 2005 and also featured contributions from Will Oldham. Released in 2007, Volta returned to the more playful, percussive side of Björk’s music and included collaborations with Timbaland, Toumani Diabaté, Antony Hegarty, and an all-female Icelandic choir. Her tour supporting the album was a lavish affair, as chronicled in the 2009 set Voltaic, which was released in sets ranging from a CD/DVD to limited multi-disc and vinyl editions.

While she was touring the world in support of Volta, Björk began work on her most ambitious project to date: Biophilia, an interactive exploration of humanity’s relationships to sound and the universe that would also educate listeners/viewers about music theory and science. Initially envisioned as a musical house, then an IMAX film directed by Michel Gondry, Biophilia — which took shape with the help of engineers, scientists, and video game designers — was eventually released as a suite of apps for the iPad and iPhone. The album, which was also released on CD, arrived in October 2011. Bastards, a collection of Biophilia remixes, was released in Europe in late 2012 and in the U.S. in early 2013. Around that time, Björk launched a Kickstarter campaign to fund translating the Biophilia app for Android and Windows 8 platforms. Though the campaign was canceled after ten days, the app was translated to Android in July 2013. That month, she also appeared in When Björk Met Attenborough, a BBC Channel 4 documentary with Sir David Attenborough and scientist Oliver Sacks that related Biophilia to humanity’s relationship with music.

In 2014, Björk contributed vocals to Death Grips’ album Niggas on the Moon. She also continued the Biophilia project with a live concert film, Biophilia Live. Filmed at London’s Alexandra Palace and featuring spectacular visuals, it was released theatrically and in DVD and Blu-ray sets that also included the live audio on CD. Late that year, it was announced that producers Arca and the Haxan Cloak collaborated on her upcoming album. Vulnicura, which traced the aftermath of Björk’s relationship with Matthew Barney and harked back to the sounds of Vespertine and Homogenic, arrived in January 2015 after it was leaked ahead of its scheduled March release date. An acoustic version of the album, Vulnicura Strings, arrived at the end of 2015 and featured the viola organista, a keyboard-driven string instrument designed by Leonardo da Vinci. That year, Vulnicura Live, which featured Björk’s favorite performances of the album’s songs as well as some chosen from her other albums, was given a limited release; wider distribution followed in 2016. The following year, Björk once again teamed up with Arca for a follow-up to Vulnicura. The lighter but still complex Utopia, which featured Icelandic and Venezuelan birdsong, an all-female flute section, and lyrics inspired by science fiction and folklore, arrived in late 2017.

Daniel is an illustrator/graphic designer based out of Austin Texas. He graduated from Pratt Institute with a Bachelors degree in Illustration and an Associates degree in Graphic Design. Daniel started his career in graphic design in the world of online casinos. Since then he’s worked with various clients from around the United States and Canada including but not limited to NHL, Subway, Paraco Propane, Pitney Bowes, Xerox, Conduent, Nestle Waters, The Spill Magazine, Stamford CT’s DSSD, Beechnut Baby Foods, Elizabeth Arden and much more.
RELATED ARTICLES
björkdaniel adamsone little indian records