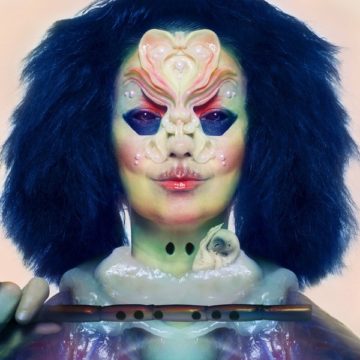 Björk’s latest and ninth studio album, Utopia, is an audible journey into her whimsical and sonic dream world. Undoubtedly one of her best releases, flutes and bird songs carry you throughout the fourteen tracks, only two of which are fewer than four minutes in length, with some lasting ten minutes. The opening track, “Arisen my Senses”, sets a cheerful yet shadowy tone, offering a glimpse of what is to come.

The antithesis to her last release, Vulnicura, the brighter Utopia was written, produced and recorded between Reykjavik and New York with co-producer Alejandro Ghersi (ARCA). Commenting on Utopia Björk stated: “If you feel this world is not headed the right way, you have to be D.I.Y. and make a little fortress.” Bjork’s little fortress is mythical and fantastical, as her first single and video release from this album, “The Gate”, conjure a pastel hued world of yonnic-like-amoebas and glittery helix-like creatures, while her piercing vocals hauntingly ring throughout the track. Stand out tracks include “Claimstaker” and “Sue Me,” as well as “Blissing Me,” a ballad showcasing her brilliant vocals and sense of wonder.

Further commenting on Utopia, Björk stated: “Maybe that’s why it became a utopian theme. If we’re gonna survive – not on my personal drama, but also the sort of situation the world is in today, we’ve got to come up with a new plan. If we don’t have the dream, we’re just not going to change.” Utopia is a long winding road of dreamy elegance and passion from an artist who has created her own private world in reaction to the one she exists in.

Gerry Young is President of Current Records and Management, and author of the 2011 biography Pop Goes The Weasel: Rock And Roll Off The Record, available at Indigo/Chapters, Barnes & Noble, and Amazon.com. He has recorded and managed Juno Award winning bands Martha And The Muffins and The Parachute Club among others.
RELATED ARTICLES
album reviewsbjörkone little indian records
8.0