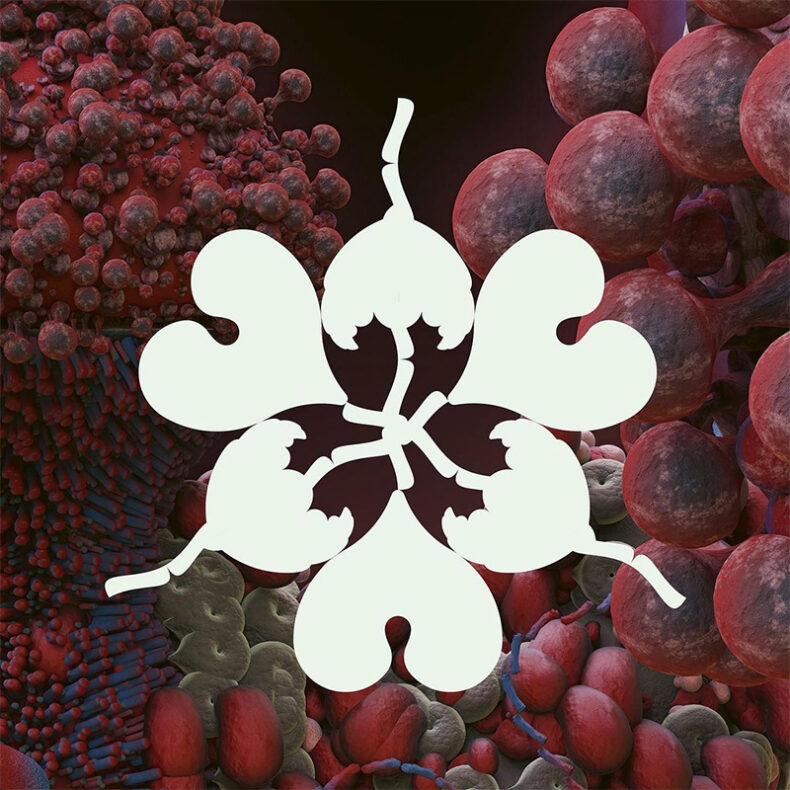 Björk used her passionate single “ovule” to explore the fragility and uniqueness of love in all its complex forms. Now, Sega Bodega, known for his glitchy, industrial-inspired sounds and big, cinematic floor-fillers, has drawn out the track’s tension and reflected its delicate beauty. The remix reaches further heights with epic additional vocals by rising star Shygirl.

“ovule ft. Shygirl (Sega Bodega remix)” emphasises the track’s majestic percussive elements, Sega Bodega describes making it as, “kind of a full circle moment here, for me at least. The three of us had an evening of all listening to music we loved at Shy’s place last year and after absorbing that the remix came together pretty quickly – we like things fast.”

A visual for the track was created by M/M Paris – watch below or HERE.

The original version of “ovule”, from her Grammy-nominated album fossora came in September with a music video creative-directed by Björk and directed by Nick Knight.

“it has been so nourishing sharing music with shy and sega ….
soooo honoured to be in their hands !!
and in this remix admiring sega exploring chill-bassdrum-gabba
and a thrill seeing shy diving into my lyrics and taking it to a new place ….
( i hope to repay the favour soon ) …and seeing them perform it live in london was humbling ….
grrrrratitudes !!”

Björk is a multidisciplinary artist who, time and again, innovates across music, art, fashion and technology. From writing, arranging and producing an expansive music catalogue to her collaborations with scientists, app developers, writers, inventors, musicians and instrument makers, Björk continues to inspire and experiment, redefining the boundaries of what it means to be a musician.

Producer, performer and label head Sega Bodega has established an otherworldly production style that’s marked him as a pioneer within the alternative and electronic spaces. Alongside the release of solo albums (‘Salvador’, 2020; ‘Romeo’, 2021), he has also been a crucial creative hand in countless projects over the past decade including the A&R and development of artists under his NUXXE label; acclaimed production for artists including Caroline Polachek (latest single ‘Sunset’), Oklou, Shygirl and Zebra Katz; and his evermore groundbreaking solo work, the latest of which is single ‘Kepko’. As part of NUXXE, Bodega has been featured in Dazed 100, a list of the most influential artists operating in art and media today.

Shygirl, the multidisciplinary artist and siren who has captured our gaze, emerged from the water with her debut album ‘Nymph’. Simultaneously asserting her power and freedom and yet still longing for love, she delivers us harmonious verses and catchy hooks telling stories of relationships, sexual desires and romantic frustrations. Over lush production, Shygirl brings us on the journey of what intimacy is like for a woman who’s seen as “too hot to handle”, someone sought after and overlooked at the same time. Melodies intertwine with the sounds of bassline, garage, dancehall and hip hop as Shygirl jumps through a vast range of emotions and situations dealing with intimacy as well as self-love, introspection, and prowess.

fossora is available to stream and buy now www.bjork.com

by SPILL NEWS on October 8, 2021
BJÖRK ANNOUNCES NEW CORNUCOPIA DATES FOR 2022 LIVESTREAM TICKETS FOR 2021 ORCHESTRAL SHOWS IN REYKYAVÍK AVAILABLE NOW Björk’s acclaimed production Cornucopia, produced with an award-winning team of digital and theatrical collaborators and based [...]

by Daniel Adams on March 9, 2018
THE SPILL MAGAZINE ARTIST PORTRAIT: BJÖRK A visionary artist who effortlessly blends avant-garde and pop elements, Björk soon eclipsed the popularity of her former group the Sugarcubes when she launched her solo career after the group’s [...]
9.0