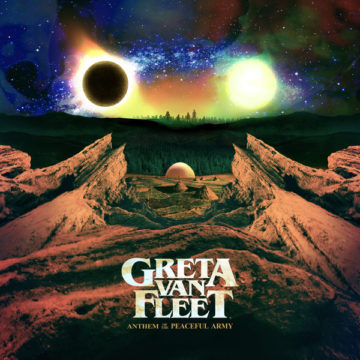 While 2017 was the year Greta Van Fleet popped onto everyone’s radar with the strong release of their debut double EP, From The Fires. Since then, Greta Van Fleet has continued to make headlines as rock’s most promising up and coming artist, the band has released their debut, -length studio album, Anthem Of The Peaceful Army. Love ‘em or hate ‘em, the hype surrounding the band and this album is huge, but more importantly, Anthem Of The Peaceful Army is a record that truly solidifies them as rock ‘n’ roll’s next big thing.

Opening with “Age Of Man”, the album starts off quiet and slow as the track grows to include crunching guitars, and grooving drums. The slow pace of the track allows for it to naturally build momentum and intensity through the band’s strong songwriting. That being said, the song seems like a strange fit to kick off one’s debut full length album – it sounds as if it would be better suited as a dramatic closing number for the album. You could say that Anthem Of The Peaceful Army truly gets started on “The Cold Wind”, a straight ahead stomping blues rock number pulled from the mid ‘70s. Again, though, “The Cold Wind” feels like a soft opening when compared to the following track and lead single, “When The Curtain Falls”, a song driven by a riff that feels equally inspired by Jimi Hendrix as it is Led Zeppelin. As a whole, each member of the band shines as an individual, and as a tight unit on this track, but it is worth pointing out that guitarist Jake Kiszka’s lead riff and solo is absolutely fantastic, and drummer Danny Wagner’s groove is one of his strongest across the album.

What must be said about Greta Van Fleet and Anthem Of The Peaceful Army is that despite how similar sonically and inspired they may be by Led Zeppelin, they truly flex their songwriting abilities across this album. While the Zeppelin influence is undeniably huge, the band is turning out great original material that more than once takes an unexpected turn. “Lover, Leaver (Taker, Believer)” stands as one of the most unique tracks and an example of their songwriting at its strongest – crunching riffs, a sophisticated solo, a building progression, an experimental breakdown, and Josh Kiszka’s roaring vocals elevate this song above the rest. “Brave New World” also stands out as another track fueled by excellent songwriting in the form of a dark slow burner.

For all Greta Van Fleet has accomplished in the last year, Anthem Of The Peaceful Army is perhaps the band’s greatest achievement. Not simply for it’s musical quality, but for the reason that this was an album that was able to surpass the ever growing hype rather than be crushed by the swarming expectations upon takeoff. Instead, Great Van Fleet show exactly why such hype has been building with an album that is more than certain to take them to the next level.

A passion for music has always been a part of Gerrod’s life. As a young boy, he was raised on a steady diet of the music from The Chili Peppers, Aerosmith, The Stones, Prince, and others from his mum. Raised in the GTA, Gerrod continued to foster his love for music by attending a wide range of concerts and learning the drums. His unapologetic passion for music has no bounds and has spread to a wide variety of styles, whether it be the 90’s rock that sound tracked his teenage years, the jazz he studied in university, or his newfound love for hip-hop. He recently received his bachelors in music and education from York University and is passionate about writing and reviewing good (and less than good) music. Gerrod is also the drummer and songwriter for a Toronto based rock & roll band, One In The Chamber.
RELATED ARTICLES
album reviewalbum reviewsanthem of the peaceful army
8.0