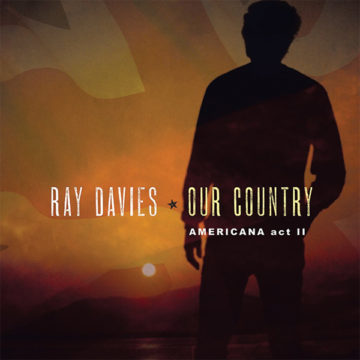 Our Country: Americana Act II is not so much a sequel to the very successful 2017 release, Americana,  as it is a continuation. Ray Davies has based both albums on his 2013 book Americana: The Kinks, The Riff, The Road: The Story (essential reading for all fans of The Kinks and Davies). But, Our Country: Americana Act II does not pick up where Americana left off, although  it continues on the same road. And, as with Americana, Davies has knocked it out of the ballpark again. This is one of his best albums with or without The Kinks.

Davies has always been a storyteller. And the best stories he tells are his own. He has created many characters in the past (Arthur, The Spiv from Preservation Acts One and Two, Lola), but he is at his absolute best when he tells of his own life. Let’s face it, this is a man who has had a fascinating life and many of those incredible stories happened in the United States and he discusses and sings about them on this album.

Although Davies is a proud Londoner, he has spent a great deal of his professional and personal life on the roads and highways of the U.S. On this album he relates stories of his time in America,  including stories of him being shot in New Orleans (“The Big Weird”), the time The Kinks were banned from playing live in the U.S. (“The Invaders”) and many others. He also writes songs about missing England (“Calling Home”, which recalls The Kinks classic “See My Friends”). And there is more, much more.

Davies has always been one to sit and observe. And he has been observing American life for the last fifty plus years. He is not so much critical as he is honest with what he sees. He incorporates his view of Americana in with his own experiences. At times funny and at times very sad. He also writes those classic melodies to accompany his poetry.

Once again he is backed, primarily, by The Jayhawks, which is a match made in heaven.

And it is somewhat comforting to see that he, once again, recorded the album in Konk Studios in London. He also works with co-producers who understand what he is trying to do, and Guy Massey and John Jackson let Davies do what he does best, and just highlight his many strengths. The production is near flawless.

He does acknowledge his and The Kinks’ history by dipping into their catalogue. Here he re-records the meditative “Oklahoma USA” (“All life we work, but work is a bore. If life’s for living, what’s living for?” Davies asks in this song), which was originally found on The Kinks Muswell Hillbillies.  There is also an interesting cover of the title track “Muswell Hillbillies”, but on this album he rewrites the lyrics and comes up with “Muswell Kills”. Davies also revisits “The Real World” (from his 2007 album Working Man’s Cafe) and “The Getaway” (from his 2006 album Other People’s Lives). While the new arrangements do not add much to the songs, they are welcomed here and great to hear again.

Davies may not have the voice he once did (he is 74), nor is this an album of power chords, but that is fine. He writes incredible songs and writes some of the most beautiful melodies being written today. Our Country: Americana Act II is very personal and yet full of social commentary. It is a brilliant album and one which sits comfortably with Davies’ Kinks catalogue.

Born and raised in Whitby, Aaron discovered music through his love of The Beatles. This led to a career in radio, writing for various publications, and ultimately a radio show about The Beatles (Beatles Universe), which ran for over four years. When not immersed in music, Aaron enjoys spending time with the loves of his life -- his wife Andrea, and daughters Emily and Linda (all of whom have an intense love of music too).
RELATED ARTICLES
album reviewalbum reviewsamericana
8.0