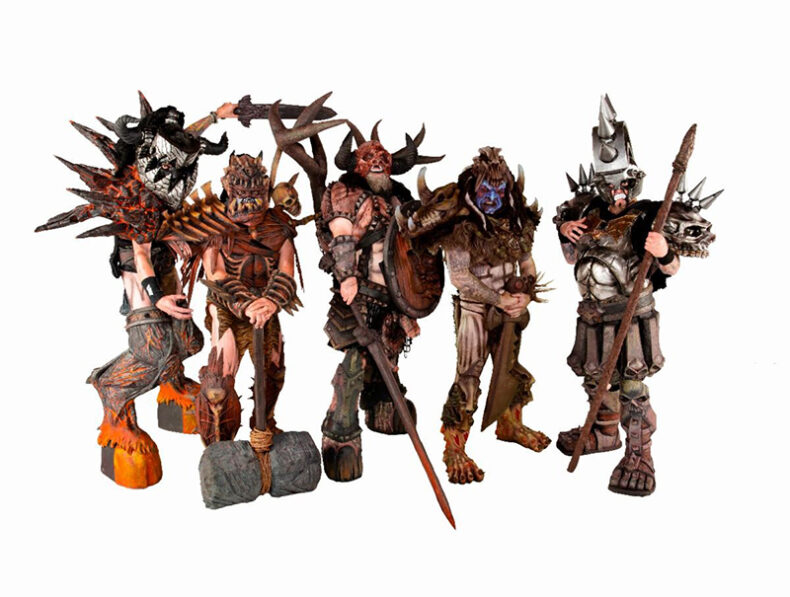 A CONVERSATION WITH GWAR

Peddling their 15th album, The New Dark Ages, GWAR’s current massacre circuiting the U.S. and Europe is The Black Death Rager Tour, a reference to both the Black Plague that decimated a fifth of the world’s population in the 14th century, and to COVID-19. On his inaugural appearance trolling FOX News last year, GWAR’s musical doctor of distinction, the Berserker Blóthar, neither confirmed nor denied GWAR had anything to do with wreaking COVID upon the human race, saying, “It’s not our fault. It wasn’t an accident either. Uh, did I say that right? My lawyer is here.”

Speaking of lawyers, I tell Pustulus I saw GWAR play in Charlotte, NC in March 1990. I didn’t go to their next Charlotte show that September, where police arrested founding monster, GWAR’s previous lead singer Oderus Urungus/Dave Brockie—Rock in Peace—on obscenity charges for his costume’s cuttlefish freaky phallus. (I probably had a history test the next day.) The ‘extension’ of Oderus’s thing-hood was confiscated, and to this day it languishes in an unknown location. Once speculated to be in a bedroom drawer of Tipper Gore, toted in the drawers of tighty-whitey, flimsy Lindsey Graham, South Carolina’s spineless senior senator, seems like a plausible place for it now.

The obscenity of this odious event inspired GWAR’s 1992 album, America Must Be Destroyed and galvanized movements to vote out elected bigots in North Carolina, who seem to hold just as many statewide offices today. “Damn, you’re old! How old are you?” demands Pustulus. What an ice-hole—his stalled thaw from the Antarctic ice meant Pustulus didn’t join GWAR until 2012, and he’s still in the band. Because, says Pustulus,” “Burger King won’t hire me back!” He’s been double-dipping the special sauce for several shows on this tour, murdering lead vocals in addition to his lead guitar duties while Blóthar has been under the weather. What a whopper! That better be double time-and-a-half on Pustulus’s paycheck!

GWAR makes sure they also visit college towns and cities in small to mid-sized markets. They recently ravaged Colorado Springs and Grand Junction after battling through blizzard conditions from a surprise May snowstorm dumping a foot of snow. Fans attended in good numbers despite the weather. “Some Bohabs needed a little warming up,” Pustulus recalls, as if they were pork chops at the sometimes-annual GWAR B-Q. GWAR has pillaged Canadian cities with equal force and frequency as they have American cesspools. They have targeted the University of Calgary’s McEwan Hall at least 14 times since 2000, more than any venue in North America this century. What’s so special about it and Calgary’s Bohabs? “The Canadian college town environment outside is so different. It’s at odds with the carnage we wreak inside. McEwan Hall has plenty of space to play and great sound. When you step into that ballroom, you’re in our world—we own you. Like everywhere else we play.” 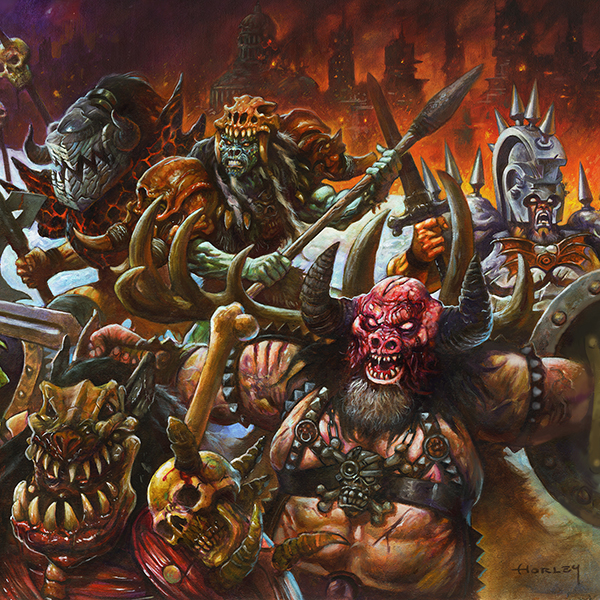 The New Dark Ages is more metal but not more fun than their last album, The Blood of Gods (2017). “Venom of the Platypus” has your technical metal, a moody electronic intro, a false ending, a half-time bridge, and a cool animal. “Buy me a sword, buy me a gun, there’s gonna be a fight/ Buy me a war, buy me a sword, I want free shipping, I want it overnight.” Is Blóthar itemizing an imagined care package? “Berserker Mode” is Blóthar’s prog-y thrash/speed metal origin story with a Killing Joke synth hum underneath a salacious chorus:

He’s—it’s definitely on the list, a big cock rock fan for sure.

“Mother Fucking Liar” was the first single from The New Dark Ages and goes under power metal. The song is self-explanatory, but because humans are pretty dumb, vocalist the Berserker Blóthar clarified in its press release, “Motherfuck a motherfucking liar!” It is refreshing to listen to a profanity-littered song and album in which all the other words can be discerned just as clearly. Pustulus is equally candid, noting that fortunately liars have trouble blending in, because “Liars are everywhere, which is why cancel culture is so feeble and dangerous. One wrong word or phrase and everything good you’ve ever done is erased. All because of one thing you did. Look anywhere: politicians, from Donald Trump to Bernie Sanders, how much and how many…” The signal drops out and back in, “to be all in someone’s pocket? Lobbyists run the whole show; actors, managers, journalists and their clickbait titles, and the metal community has plenty of examples…”

Again, the signal drops out and back in just as Pustulus is naming either his favorite motherfucking liar or a motherfucking casualty of cancel culture, OR BOTH. “Mother Fucking Liar” is even more explicit than Pustulus is and makes it clear who qualifies for the title. GWAR’s unique position (“Huh-huh, huh-huh, he said position”) of overtly glorifying excess while indirectly denouncing it through exaggeration is a method of cultural critique shared by less interesting, less hands-on, less handsy contemporary artists. GWAR gets away with things other metal bands would not, including the nonexistent Broadway musical based upon them you read about here first.

Charles T. Stokes is a nonprofit resource development coordinator and donor researcher based in Denver, USA. He’s also a tennis player and writer looking to make a racket with his own noises. “There are places in the world where one cannot publicly listen to or perform whatever music they choose without fear of harassment or prosecution. The freedom to write about new music is power, a privilege.”
RELATED ARTICLES
beserker modefeaturesgwar