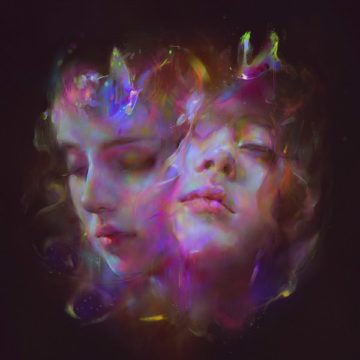 Let’s get it out of the way now and address this fact, as all Let’s Eat Grandma reviews seem almost contractually obligated to do – Jenny Hollingworth and Rosa Walton are young. Their 2016 debut I, Gemini garnered acclaim of critics when they were just 16 years old, and although only two years have passed, their latest offering I’m All Ears marks an evolution of the band into a more slick, confident and musically mature machine.

The album is paced like a good night out, with the fervor and urgency largely taking place in the first half. Lead single “Hot Pink”, co-produced by SOPHIE and Faris Badwan, brushes off gender stereotypes with the audio equivalent of an eye-roll in its chorus, “Hot pink, is it mine? Is it? Is it mine?” It immediately serves as a snarling, industrial reminder that the band is not to be underestimat-ed or defined by their age or gender. “It’s Not Just Me” and “Falling Into Me” deal with overcoming different obstacles: unrequited feelings of romance or friendship and self-doubt, respectively. The highlight of the album is “Donnie Darko”, an sprawling epic clocking in at 11 minutes. It builds from gentle synth melancholia to triumphant psych-stomp to introspective stripped-back sweetness to close the record.

Whereas I, Gemini is an endearing mish-mash of brilliant oddities, I’m All Ears is the product of a band that has found direction. If this is the ground that can be covered in a mere two years, then Let’s Eat Grandma is well on its way to becoming a experimental pop powerhouse.

Kirsten Inneski was born and raised in Scotland but fled to Canada in 2016, settling in Toronto in order to have the opportunity to see bands who rarely, if ever, make it to the UK. If her mum asks, however, the official party line is "Kirsten moved 3000 miles away from everybody she knows and loves for the totally rational reason of pursuing career in her field of TV production". Inneski writes, daydreams about making music videos she will never have the budget for* and obsesses over music and comedy, all while trying to make pals with everybody. *Eccentric billionaires can hit her up on Instagram.
RELATED ARTICLES
album reviewalbum reviews
8.0