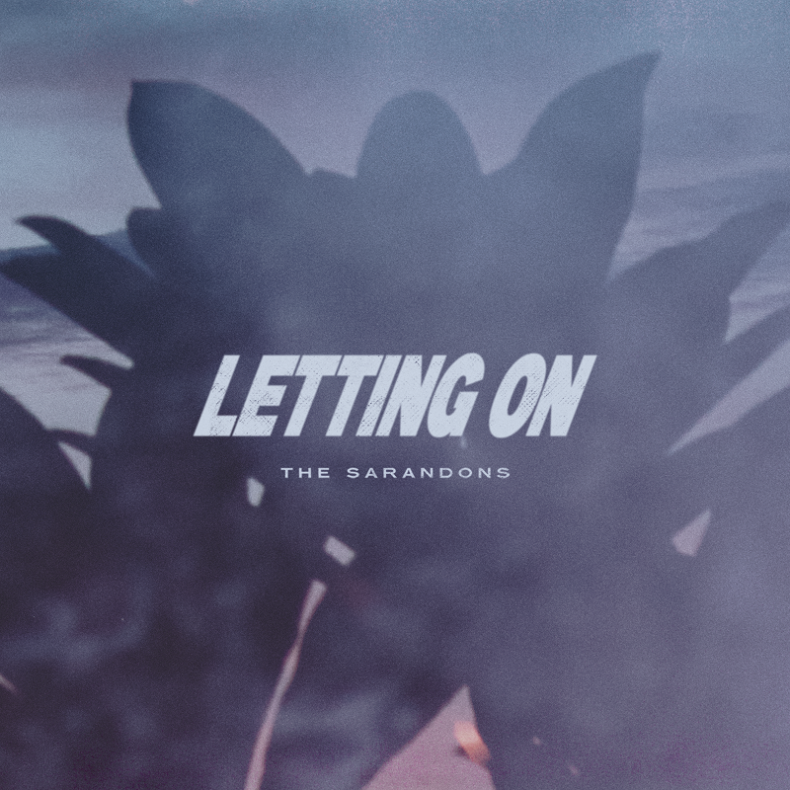 The Sarandons are the fully collaborative endeavor of Toronto music stalwarts Dave Suchon (vocals, guitar), Damian Coleman (bass, vocals), Edmund Cummings (keys, vocals), Craig Keeney (lead guitar) and Phil Skot (drums), who have been creating together in different projects for over a decade and a half.

Coming into view – hard on the heels of 2021’s Outrunning EP – The Sarandons’ Sightlines (out January 27) underscores the power of retrospection and resiliency, embracing discomfort as a means to move forward in a heartfelt journey of coming to terms with death, family and the imminent future. Though menaced by the heft of heartache, The Sarandons burn brightly with hard-won lyrics, gauzy guitars, stark countermelodies, and sparkling solos, carving out time and space for respite to succor existential dread.

Album opener “Letting On” cashes in with bristling honesty, soliloquizing in between blips of joy emitted from elated shrieks of pitch-shifted guitars: “Have you come for my ghost? / Are you here just to even the score? / Well you ain’t letting on / The only thing you’re thinking of / Just some higher law for you.”

“So Long” chews through all the doubt heretofore, anticipating a midlife breakthrough where Suchon sings, “It took me 10 years to remember / To realize which side I’m on,” as Craig Keeney acts casually in between wiry guitar solos akin to Albert Hammond Jr. and Phil Skot camps out with claves and a chilled out four-on-the-floor. It’s also plain to see why “Sightlines” is the title track, as Damian Coleman’s infectious, counterpoint basslines churn wistfully atop dance floor-ready grooves steeped in post-punk rhythms, and Keeney re-emerges with another blissfully blistering guitar solo to set said dance floor on fire, while Suchon screams, “take me back,” as if to say, “you reap what you sow.”

Elsewhere on the record, nuanced roots music and honky-tonk charm worms its way into the heart of tracks like “State to State” and “Too Many Whiskies,” where careful deliberation and complacency go to die; despite Cummings’ best efforts to lift spirits with bouncy, yet understated piano, not unlike Sky Blue Sky-era Mikael Jorgensen of Wilco, unspoken truths begin to caramelize  – as fate would have it – baked in years upon years of doubt and entropy. The end result amounts to an album that capitalizes on melancholia and the strengths of nostalgia, parsing absolutes by way of unrelenting notions of a predetermined lifestyle, where the narrator considers death in lieu of growth for a very brief moment.

“Maybe that’s a part of some of the reflection I’ve done over the last year,” says Suchon. “Coming to grips with autonomy. There was definitely something that shook loose in me. Why shouldn’t I be happy and who but me is responsible for creating that happiness? Why shouldn’t everyone be fully realized and allow themselves to find their own path?”

The irony is rich with songs like “Headlights in the Day,” with “shadows slipping past” in dreams untold, as the narrative comes to a close, and lyrics like “being returned as bits and pieces to you, honey” beg the question, “what kind of path have I lead for years on end, without ever asking any questions at all?”

“‘Letting On’ was one of those rare instances where a song just kinda flowed out – words and all. It emerged fully formed late one night in 2018 and sat on the shelf for years. Our producer, Dan Hosh, heard it and really liked it. He presented a compelling vision for how to cut it and we laid it down live off the floor, as one of the first tracks on Sightlines. It’s an intentionally simple approach that gives plenty of space around the bass, drums and melody. The sort of openness leaves lots of room for the guitar and piano adornments in the verses.

The themes of change, divergence and evolution, and how that measures up in the eyes of others are picked up perfectly in Ryan’s video where we first experience the carnival through the eyes of the protagonist, dissolving into a distorted reality, only to finally reveal what everyone else was actually seeing all along.” – David Suchon