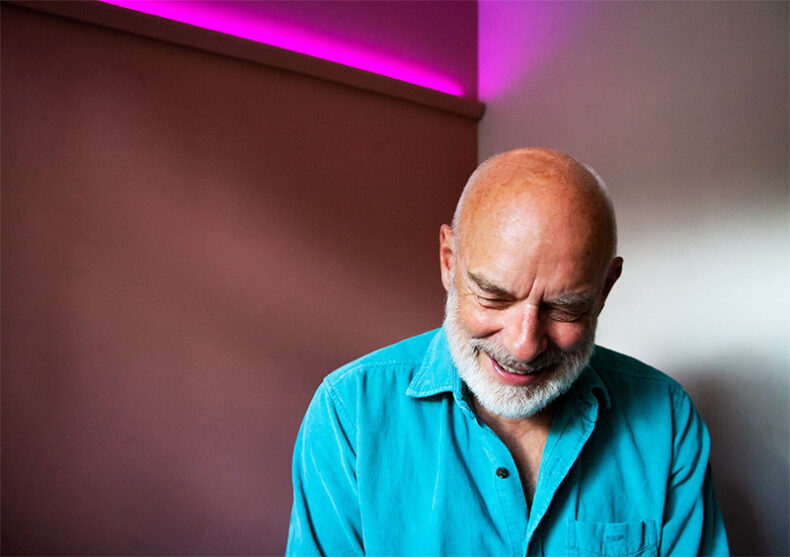 Giving some insight into the song and video, they separately commented:

“Imagine a being huge enough to have our Universe as a plaything, and to watch in fascination as that Universe is born, flourishes and finally snuffs itself out…or alternately divides into a million parallel selves….” – Brian Eno

“The Garden of Stars video imagines the creation of stars as occurring in a garden where exotic new cross breeds of flowers are created, and populate the heavens. Each one a unique variation on a universal blueprint.” – Nick Robertson

Appearing in the first half of the album, “Garden Of Stars” is among the most ominous from a record that explores our feelings about the climate emergency. Eno’s voice intones as static and a sonic maelstrom brews around his words, reaching a crescendo for, “These billion years will end. They end in me.”

A song-based album, Brian’s vocals are featured on the majority of the 10 tracks. In a fascinating and enjoyable conversation with Iggy Pop on BBC 6Music recently, he said:

“I started with all of these tracks creating a sonic world, making a world that seemed interesting to me and then I picked up a microphone and started singing, so there is no rhythm in most of the songs and very few chord changes….I thought there should be other elements just like the wind and the rain so they (the vocals) are not synchronised necessarily, they just happen… most of the time it was a pretty straightforward and immediate approach to what happened when I plugged the mic in, I got a nice sound and suddenly I was a different person in a different place, thinking I’ll have an adventure.” – Brian Eno

The record was made at his studios in West London and Norfolk and is available HERE. The record is at times choral and hymnal, sometimes apocalyptic and then hauntingly beautiful; you can watch two tracks from the album, “We Let It In” (WATCH) also featuring Brian’s daughter, Darla, and “There Were Bells” (WATCH) here.

by Aaron Badgley on October 14, 2022
Brian Eno FOREVERANDEVERNOMORE Verve/UMC When Brian Eno left Roxy Music, after their second album (For Your Pleasure) in 1972, and released his debut solo album, Here Come The Warm Jets, print ads appeared in the British press ‘Eno Sings’, a [...]
9.0

by Anthony Pedroza on March 20, 2020
Roger Eno And Brian Eno Mixing Colours Deutsche Grammophon I’ve loved Roger Eno’s work ever since I heard “In a Room”. His latest release, Mixing Colours, has calmed my mind the past few days, and it has been splendid. A minute into “Spring [...]