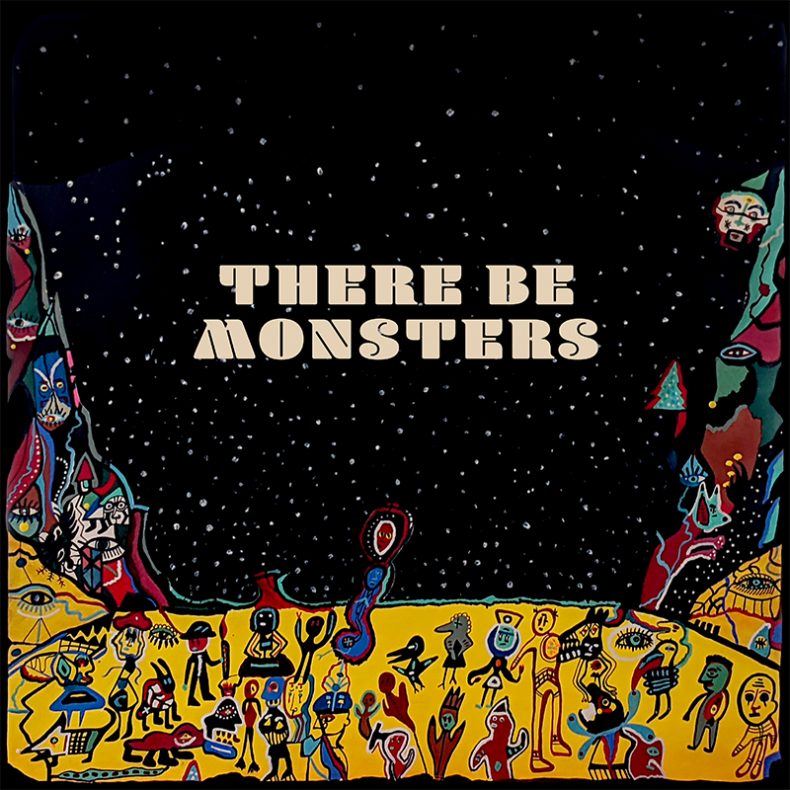 The Pacific Northwest holds a wealth of beautiful things to get excited about: never- ending pine forests and coastal views surrounded by stark, snow-capped mountains, some of the world’s finest coffee, and a blustering creative scene that leads many to migrate west. That said, it can be bleak, especially in the winter months where rain dominates everything. It can lead some, if not most, to reconsider and think, “maybe we should move.” Yet for those who stay, the bleak months can inspire fruitful, creative spurts. And it took a freak ice storm in Portland to bring together the two local artists who would eventually create There Be Monsters, the sophomore album from Portland indie-rock band, Far Lands.

Andy McFarlane lets out a loud laugh at the memory. “We were recording the first album (2017’s Oh What An Honor, Oh What A Drag), and Matt (Drenik, producer) decided we needed some backing vocals. Next thing I knew, this lanky dude came bursting through the door with a giant scraper!”

PDX local, Ivan Howard (The Rosebuds, GAYNGS, Howard Ivans), the “lanky dude” in question, concurs. “I was going stir crazy because everything was shut down. The ice was taking its toll, so I used an old hoe I found in the shed of our rental house, and made my way on foot to the studio. It was only about a mile!”

“I couldn’t believe he showed up,” Drenik says. “I was just looking for a different voice on a song, and I figured he would just do it at home.”

And so, a new chapter begins.

Story goes, Leonard Cohen once asked Bob Dylan how long it took to write a song.

“About five minutes,” Dylan shrugged. “How about you?”

Like the gravel throated legend, McFarlane’s attention to detail and care for songcraft means no idea appears before its time.

“The first album was drawn from about ten years of writing,” McFarlane says. “A lot of heavy emotion; processing the death of my parents, the end of my marriage. As I started writing the new album, I began to feel a bigger sense of optimism. I guess it was time to set sadness to rest.

Before long, McFarlane had basic structure and chords for a handful of songs and was ready to start recording, but his main collaborator, Matt Drenik, had moved to California.

“My phone was packed with voice memos. Melodies would come to me while I slept, and I’d sit up, grab my phone, hum a little fragment, then back to sleep. Most of the time I wouldn’t even remember what it was til the next morning.”

With fragments of songs cluttering his voice memo box and arrangements beginning to fill notebook pages, McFarlane just needed someone to help form these into a record.

Enter Ivan Howard. Having provided backup vocals on the Far Lands debut LP, he joined the “touring” band on bass. And since Drenik’s departure, Howard had stepped in as McFarlane’s artistic counterpart. So when the fragments started to overflow, he seemed to be a natural fit for helping McFarlane take these scattered songs into fully realized soundscapes.

“Andy read me a poem, and it floored me,” Howard says. “It was so raw and honest and magical, like when I first heard Neil Young. I knew he had to put these on a record, and I knew I wanted to do it.”

McFarlane, for his part, is equally effusive. “To have someone like Ivan Howard believe in your stuff is really wonderful. We sat and worked on songs for months in his home studio, letting the seeds take hold.

Howard’s list of collaborations is long and head turning. It’s not every day that the same person who shows up to the studio to offer some backing vocals is the same person that happens to be a collaborator of Justin Vernon’s (Bon Iver, GANYS), and flew to Vernon’s studio to cut vocals on a Kanye West track.

Howard and McFarlane entered the studio, keeping many of the core players from the last album, while tapping Howard’s rolodex for new talent (Alexandra Savior, Mel Guérison).

Howard busts a big smile, “every night, we’d eat dinner and just have fun as a creative crew.”

Where Oh, What an Honor, Oh, What a Drag was paired down and singular in focus, There Be Monsters is sprawling and expansive, the technicolor tonal palettes shifting moods throughout, the usual guitars and synths augmented by soulful horns or lush strings.

But the creative simplicity of recording stood in stark contrast to the developing situation in Portland, with the COVID-19 pandemic being compounded by scattered protests and calls for racial justice. The album’s themes of exploring the unknown, both externally and internally, started to take on a different tone as 2020 wound on. As the sessions drew to a close and the album became ready for release, McFarlane sat back and took stock.

“Releasing the album (in 2020) didn’t feel right,” he says. “My story wasn’t the one the world needed to hear.

Frankly, not much has changed. The world is still aimless and unsettled, the disease still rages, and things are still tough, but it’s time for the world to hear McFarlane’s second act; one of love, growth and change.

It’s a reminder to navigate these trying days with an open heart, and take comfort in the ever-expanding unknown, because maybe you’ll end up in an ice storm that will change your life.

I think “It’s Time” is a good example of something we’re trying to explore throughout the entire album – shying away from the typical verse/chorus/bridge song structure in favor of building sound around the themes and feelings of different verses within a poem. It starts out slow and hypnotic and builds to a sharp shift on the back end with pulsing horns and the haunting sweetness of Alexandra Savior’s vocal accompaniment. “It’s Time” unfolds in two parts as a reflection on struggle being viewed in the very near past and an assertion that it’s in the rawness of recent pains that the way forward can present itself in the form of dusted-off dreams.

Purchase There Be Monsters Via