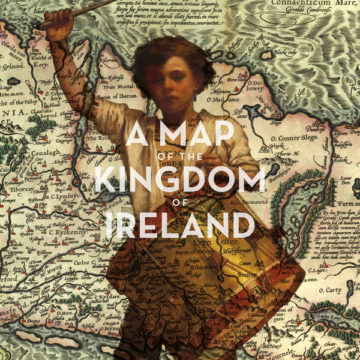 Various Artists
A Map Of The Kingdom Of Ireland
Heresy Records

In 2013, Heresy Records released its compilation On the Nature of Electricity & Acoustics to wide acclaim, bringing to light some of the most innovative and dynamic sound work ever to come out of Ireland. With A Map of the Kingdom of Ireland, Heresy’s visionary producer Eric Fraad has once again assembled some of the most vivid electro-acoustic talents from the titular isle to offer a refreshing reprieve from both overlabored pop musics and the heady avant-garde, while unassumingly retaining elements of both. Consistent with its predecessor, discovering this compilation is like finding a long-hidden aquifer ready to yield sounds that have been too long known to too few.

As the gentle piano chords of Paul Morrin’s “Compass” that introduce the set give way to pulsing electric rhythms that gradually weave around the piano play, the piece enters the terrain where the artists on this album excel — a place where traditional instrumentation and song structures meet with base elements of electronic music and become something altogether unexpected and beautiful.

Tóirse Ó Ríordáin, one of the strongest artists in this collection, picks up the tempo with the first of his compositions on this record, “Atop D’Seefin (Educution remix),” and keeps it moving with graceful harmonies supplied by effected guitar, harmonica, synths and drums, wringing exquisite feeling out of an almost deceptive dynamism. In lesser hands, this could have been a nice passage for guitar and harmonica, but Ó Ríordáin’s choice of textures and treatments take this out of the realm of the pejoratively “nice,” and into realms that demand the listener’s consideration. And just like that, we’re on our way.

A 1997 piece from Daniel Figgis, “Timothy Cream’s Crown of Wines” is an absolute stunner. Those familiar with Figgis’ 1995 album Skipper will know the alchemy of which Figgis is capable, taking wholly unrecognizable loops of idiosyncratic sound and playing against them to create richly imagined worlds that exist nowhere else, and that leave you forever grateful. This entry is no exception, and is in fact an unqualified masterpiece of his art, and one not to be missed.

The album boasts a number of surprises, including an all-too-rare appearance from Richard G. Evans. Most appropriately recalled as the anti-guitar whiz of Dublin art shock band Virgin Prunes, Evans has sporadically but quietly turned up in collaborations in the intervening years, with outfits as varied as Nurse With Wound and his 1990s band Screech Owls. Here he appears with Figgis on their track, “Little Train to Heaven.” Their meeting here is a driving, yet atmospheric piece that shows a much more mature development of the techniques that Evans and his Prunes bandmates first explored in their youth. A tantalizing amuse-bouche of sorts, it clearly illustrates that Evans has more to say than even his past outings suggest. Would be nice to see a full-length from this gentleman.

Roger Doyle, an essential presence in this collection due to his undeniable stature as the widely acknowledged “godfather of electronic music” in Ireland, has contributed two tracks to the disc. His “Eighties Rampwalk,” originally released under the name of the legendary performing group Operating Theatre, of which he was a founding member, was recorded at an RTE David Fanning Session in 1981. It’s a sparse, warm, almost ambient re-creation of the Operating Theatre track “Rampwalk.” His other track on this collection, “Finale from ‘The Room in the Tower’,” is a lush electronic coda from a 55-minute “audio theater” work that suffers not a whit from its re-contextualization.

It’s very difficult not to highlight all of the 17 pieces in this collection, which also includes brilliant tracks from Vincent Doherty and Microdisney’s Cathal Coughlan among others. (The digital download includes an additional four tracks from Doherty, SOM, and Deafector, as well as the original version of Doyle’s “Rampwalk,” with Olwen Fouéré on vocals.) What makes it so stunning is that even though there is a wide range of talents and, in some cases, a wide disparity of years between the material — Doyle’s 1981 track is the earliest; many of the other tracks were completed in much more recent years — is that due to the keen exploration and obvious depth of character and feeling of everyone involved, there is a wonderful continuity and cohesiveness that makes this album eminently listenable from stem to stern. Everything on the comp belongs here, and pulls its weight in contributing to the description of an isle brimming with unbridled creativity.

If there is a cavil to be leveled at A Map of the Kingdom of Ireland, it’s the minor disappointment that the tracks from the mighty Princess Tinymeat, Dublin’s art-terror group of the mid-’80s, consist entirely of material re-edited from their previous records. Given that outside of Dublin, Princess Tinymeat’s reputation rests squarely on the eight tracks that make up its career-summing HerstoryLP, the addition of two previously unreleased tracks would be reason enough for many to pick up this compilation who might otherwise never have given it a shot. And even though the group’s “MegaMix” on offer here is actually a brilliant Frankenstein’s monster of an edit, the dashed hopes of what might have been are the single bruise that keep this disc from rating just a little bit higher.