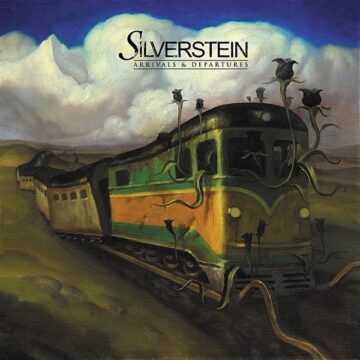 Looking back on Silverstein’s Arrivals & Departures, it’s a listening experience met with mixed emotions but one that brought about an evolved level change of sound for the band. While many welcomed this change, others were less enthusiastic about the band’s dissonant use of musical tone in their future soundscapes. When one considers one of their most successful tour de force releases, Discovering The Waterfront, it’s easy to see why people would oppose such a change. Arrivals & Departures (15th Anniversary Edition), on the other hand, continues to observe with this  vinyl re-release. When it comes to their razor-sharp creativity and willingness to expand their musical dynamic, they do so with grace and respect for the genres that brought them here.

While the creative process for Arrivals & Departures was challenging, the result was an album that displayed that they could bravely go the distance. They dug deeper than the band and their problems to create something special. It was not an album that offered fan favourite atmospheres that were relentlessly heavy and lush like Discovering The Waterfront did, or the dominant melodically aggressive nature such as on A Shipwreck In The Sand. Arrivals & Departures, even now, offers something a little more clean, honest, and dispirited, all very accurately connected to what we have been experiencing over the last few years.

While the instrumentation within this album goes for something simple in its approach, Silverstein never shies away from emotional vulnerability. Experiences like “Bodies And Words” and “If You Could See Into My Soul” offer a tenebrous lyrical approach while still providing the engaging instrumental approach we love, but one that is reserved and controlled. These small nuances are not understood or appreciated until you listen to the record more than once.

Other highlights of this record are “Worlds Apart” and “My Disaster,” where all the riffs, rhythms, and percussive energies are not grandiose in presentation, but the emotion is felt from start to finish. Other catchy points of interest are “Still Dreaming” and “Here Today, Gone Tomorrow,” which capture the band’s sense of infectiously melodic charm while keeping in stride with the emotional nature of the record overall.

Gorgeous movements on this vinyl are “Vanity And Greed” and “Love With Caution.” Full-bodied and beautifully enveloping all the atmospheric touches the band has taken the time to develop throughout the album, the 15th anniversary edition further extends its uncomplicated and infectious instrumentality, giving the listener a chance to appreciate the work they put into this album.

The vinyl ends with the impressive and lavish bonus track finale, “Falling Down.” Here the band’s guitars, vocals, and lyrical creativity shine most brightly. If anyone concluded that this album was anything short of underdeveloped from their previous releases, tracks like these offer a secure second opinion to prove otherwise.

Arrivals & Departures is one of those albums that separates itself from the rising popularity of bands that were set in their ways when it came to style. Silverstein has always been a band that despite troubling times went against the grain when it came to musical genre, yet still found a way to maintain form. By 2007, you had many bands mixing genres with the post-hardcore genre and excelling.  Arrivals & Departures is one of those albums within that transition period, blending post-hardcore, emo, and other elements while being clean in its delivery. The 15th anniversary edition of this album gives us a new reason to appreciate this record, showing that the band could deliver something on the heavier side without having to overextend and prove they deserve to be in that realm. There is something beautiful and meaningful in subtlety, and Arrivals & Departures (15th Anniversary Edition) shares that and more.