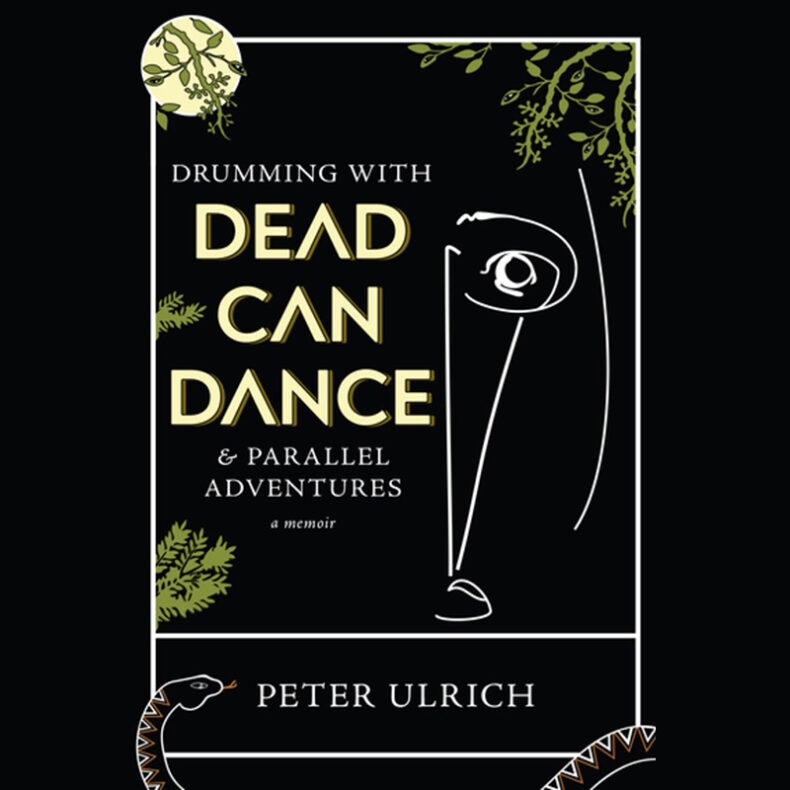 Dead Can Dance formed in their native Australia in 1981. The core of the band was (and is) Brendan Perry and Lisa Gerrard. When they relocated to England and settled in the east end of London named Isle of Dogs, they met drummer Peter Ulrich who joined the band. Drumming With Dead Can Dance & Parallel Adventures. A Memoir is Ulrich’s story about his time before, during and after Dead Can Dance. It is a treat to read, and it is a beautiful book.

It is clear that not only is Ulrich an outstanding musician, he is a wonderful storyteller and author. He tells his story, from his childhood up to the present, and his love of music and his friends. This is an important piece. This book is really the story of friends. From the very beginning, Ulrich makes it quite clear that Dead Can Dance is Perry’s project. Gerrard contributes a great deal, but when push comes to shove, it is really Perry’s vision. But this is established without any drama, bitterness, or resentment. It is a simple fact and the bottom line is that everyone involved wanted to make the best possible music. And then they succeeded. In the core is a deep friendship between all three.

For example, when Ulrich is informed that a drum machine will be used on an album (Dead Can Dance’s second album, Spleen and Ideal), he busies himself in the kitchen and appoints himself head chef to prepare meals for the band, producer, and engineer. He joins in the celebration of the album and admires the outcome of the recording. It is refreshing to read something with absolutely no ax to grind.

That doesn’t mean he candy coats stories or brushes off incidents. His take on Robin Guthrie from The Cocteau Twins is very funny and is not that overly surprising. That is also an interesting aspect of the book. Ulrich is very funny. Being dragged from a hotel’s excellent continental breakfast is extremely funny in his telling. He is also very clear when things do not work out. Again, no anger, just matter of fact what happened. This is very refreshing.

The other thing about Drumming With Dead Can Dance & Parallel Adventures.  A Memoir is the behind the scenes look at record companies, Ivo Watts-Russell (the owner of 4AD records), and 4AD. It is an interesting aspect to the book and quite informative. It is also interesting to read how Dead Can Dance navigated through the system in their own distinct way. Ulrich also discusses his own solo career and other projects, which once again provides insight into a musician’s professional career.

Ulrich also has a great deal of knowledge of world music and this comes through throughout the book. His openness to learn and explore world music is fascinating and informative. His appendix in which he explains and discusses various artists will have one hitting the internet and discovering new music.

Drumming With Dead Can Dance & Parallel Adventures. A Memoir is a great book. Quite frankly it is one of the best memoirs I have read. It is honest, open, and while very in depth, it is a fun and interesting book to read. You do not have to be a fan of Dead Can Dance but if you are not, you will be once you have finished reading it.

Purchase Drumming With Dead Can Dance & Parallel Adventures. A Memoir Via Red Hen Press HERE Or Via

Born and raised in Whitby, Aaron discovered music through his love of The Beatles. This led to a career in radio, writing for various publications, and ultimately a radio show about The Beatles (Beatles Universe), which ran for over four years. When not immersed in music, Aaron enjoys spending time with the loves of his life -- his wife Andrea, and daughters Emily and Linda (all of whom have an intense love of music too).
RELATED ARTICLES
booksbrendan perrydead can dance