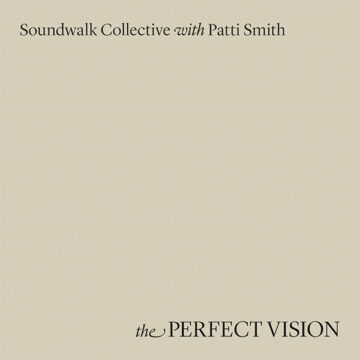 In 2019, Soundwalk Collective began working with Patti Smith, and over the next two years, the band and Smith would release three brilliant albums. Each of the three albums were based on and inspired by French poets: Antonin Artaud, Arthur Rimbaud and René Dauma. The end result was albums that were full of incredible imagery and very original and unique music. Those three albums (The Peyote Dance, Mummer Love, and Peradam) have been collected in a box with a few stellar bonuses. The packaging is extremely beautiful, which includes a 74-page book which includes a conversation between Smith and Stephan Crasneanscki of Soundwalk Collective. But perhaps the big item that will interest fans is an additional seven-track album, The Perfect Vision (Reworkings).

Fans of Soundwalk Collective know that this band does not fall into conventional categories. The three albums with Smith are excellent examples of that. Each album was recorded in remote areas of Mexico (The Peyote Dance), the Abyssinian valley of Ethiopia (Mummer Love),  and the Himalayan Summit of India (Peradam) using traditional instruments of the region but also found and environmental sounds. Smith read excerpts from the works of the poets, which was mixed into the music. The end result is chilling, adventurous, and downright brilliant.

The album opens with Brian Eno’s remix of the title track from Peradam. Eno provides one of his most exciting and creative remixes with this song. In Eno’s hands, “Peradam” becomes a sonic adventure, choosing not to use complete words from Smith and remixing the backing, creating even more space while at the same time a sense of chaos. The opposite can be said for Kaitlyn Aurelia Smith’s rework of “Song Of The Highest Tower” (from Mummer Love) where Smith’s vocals are front and centre, while the backing is much more electronic and almost ambient. Laraaji’s rework of “Ivry” (The Peyote Dance) relies on the rhythm of found nature sounds, and a backing that initially leans towards ambient until the end of the song. It is one of the most interesting reworkings. The same with Jim Jarmusch’s rework of “Eternity” (Mummer Love). But at least Jarmusch uses Smith’s vocals. It is the perfect ending for the album, and he certainly proves his ability to mix music with this song.

Elsewhere, Lucrecia Dalt’s remix of “Indian Culture” (The Peyote Dance) is very sparse and does work. Smith’s poem laid over the beat and sounds is chilling and quite interesting. The Lotic rework of “Bad Blood” (Mummer Love)  turns the song into the most conventional song on the album. It has a steady beat and although it loses a lot of what made the original so great, it is still an interesting interpretation of the song. The Atom remix of “Song Of The Highest Tower (Mummer Love) is perhaps the least interesting, which does not make it bad, just the most predictable.

Overall, a great remix/rework project for these three brilliant albums. These albums have become interesting  projects for Smith. As for Soundwalk Collective the band is known for their unusual and unpredictable music. These albums still sound great and it is nice to have them all in one box. The bonus disc is well thought out and is a welcome addition to the overall project. The Perfect Vision is an example of an astounding collaboration and the mixture of poetry and avant-garde music. It is an excellent box set and compilation.

Born and raised in Whitby, Aaron discovered music through his love of The Beatles. This led to a career in radio, writing for various publications, and ultimately a radio show about The Beatles (Beatles Universe), which ran for over four years. When not immersed in music, Aaron enjoys spending time with the loves of his life -- his wife Andrea, and daughters Emily and Linda (all of whom have an intense love of music too).
RELATED ARTICLES
album reviewalbum reviewsbella union
8.0