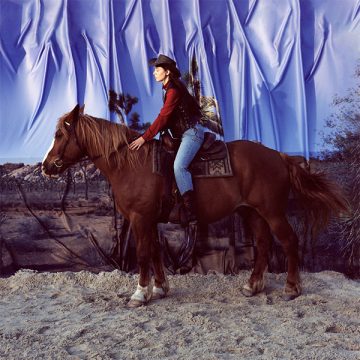 “Hold your horses, cowboy, put your pickup in reverse,” drawls Holy Motors vocalist Eliann Tulve on “Country Church.” Tulve makes a conscious effort to enunciate on the Estonian rock band’s second album, Horse. The result is an immediacy similar to when critics had to stop calling R.E.M.’s Michael Stipe “Mumbles” in the late 1980s.

Horse is akin to a Holy Motors hootenanny, markedly more confident and forward-facing than their debut. This time around, instead of directly appropriating Americana and American western film soundtracks, the guitars achieve cinematic grandeur by simply being evocative. The best example of this is their finest song to date, “Endless Night.” Hitting all the frequencies, this song alone earns the accolades lauding guitarists Lauri Raus and Gert Gutmann. At once elegiac and propulsive, “Endless Night” ends too soon. Speaking of frequencies, you’ll know if your bass EQ is too high from the low-end flicker of doom in “Midnight Cowboy,” sounding like Holy Motors playing at a prom where everyone forgot to show up.

That psychedelic spaghetti western template fuels intriguing dramatic turns in both “Trouble” and “Matador,” which has a false ending that pre-empts a searing guitar outro, and holy Epiphones, is it breathtaking. Although “Road Stars” is effective as an experimental, mid-album palate cleanser, the male voice unexpectedly joining Tulve’s is jarring; it’s just not a good duet. “Life Valley (So Many Miles Away),” a major-key instrumental with wordless vocals, closes the album on a high note. It’s the most ‘shoegaze’ of anything on Horse, and with some different effects pedals, this song would sound right at home on Ride’s Nowhere. Readily compared to Mazzy Star, Lana Del Rey, and Cowboy Junkies, with Horse, Holy Motors have made a gorgeous, stately record that puts miles between them and their reference points.

Charles T. Stokes is a nonprofit resource development coordinator and donor researcher based in Denver, USA. He’s also a tennis player and writer looking to make a racket with his own noises. “There are places in the world where one cannot publicly listen to or perform whatever music they choose without fear of harassment or prosecution. The freedom to write about new music is power, a privilege.”
RELATED ARTICLES
album reviewalbum reviewstrouble
9.0