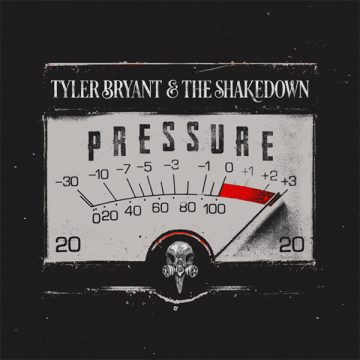 For the last decade, Tyler Bryant & The Shakedown have been among the most promising up and coming rock bands making waves throughout the underground scene. Their latest album, Pressure, follows 2019’s Shock & Awe, and continues to raise the bar for what fans should expect from the band and straight-ahead rock ‘n’ roll in 2020.

Tyler Bryant & The Shakedown open Pressure with the dark and hard-hitting title track. With Bryant’s gravelly vocals coming through a megaphone followed by a slithering guitar riff reminiscent of Slash, the track, and subsequently the record, kick off with an explosive open that feels larger than life. “Pressure” is an absolutely massive track that is simply undeniable. The band then chases the title track with a stripped- down blues number slightly more on the lo-fi side of the sonic spectrum. The two tracks complement each other and paint a balance between modern hard rock of the past twenty years and the blues rock of the ‘70s.

Throughout the 13tracks, it is most clear that Tyler Bryant & The Shakedown are at their best when they’re at their heaviest and – quite contrastingly so – when they dig deep into the blues. The haunting “Backbone” with throaty vocals nostalgic for the late Scott Weiland, the moody blues ballad “Misery”, the shaky shuffle of “Fever”, the AC/DC inspired “Automatic”, and the opening two tracks. stand as incredible highpoints for the band. On the other hand, Pressure falls flat when the band strays into a more mainstream vibe with ballads like “Loner” and the recent single “Crazy Days”.

A passion for music has always been a part of Gerrod’s life. As a young boy, he was raised on a steady diet of the music from The Chili Peppers, Aerosmith, The Stones, Prince, and others from his mum. Raised in the GTA, Gerrod continued to foster his love for music by attending a wide range of concerts and learning the drums. His unapologetic passion for music has no bounds and has spread to a wide variety of styles, whether it be the 90’s rock that sound tracked his teenage years, the jazz he studied in university, or his newfound love for hip-hop. He recently received his bachelors in music and education from York University and is passionate about writing and reviewing good (and less than good) music. Gerrod is also the drummer and songwriter for a Toronto based rock & roll band, One In The Chamber.
RELATED ARTICLES
album reviewalbum reviewspressure
8.0