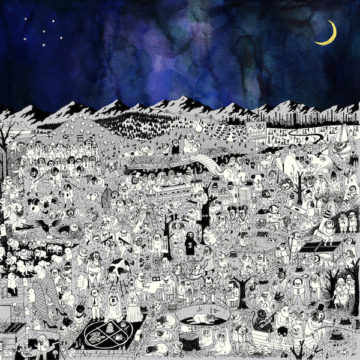 What can be said about Father John Misty (a.k.a. Josh Tillman) that has not already been said?  One thing comes to my mind.  During the last two years since the release of his last album, 2015’s I Love You,  Honeybear, his social media content both entertained and worried me. Entertained, because he can be funny, worried, because sometimes he seemed to be approaching a breakdown.

I was not sure where he would be going with his next album.  There was nothing to worry about.  Although it has been said before, it bears repeating, he is a genius.  And this album is another in the long line of brilliant albums he has created.

The new album, with the wonderful title, Pure Comedy has arrived, and while it may not have the same impact  as his last album, it is still a very good, entertaining, thought provoking album.  Overall,  Father John Misty tackles fame and celebrity on this album, even name dropping Taylor Swift.  At the end of it all, he is not too impressed with what he sees in terms of worshiping such celebrities.

But he does not stop there, he highlights capitalism, technology (and its role in the downfall of humans), politics, the environment.  And even more.  Here Tillman basically looks at the the state of the world and his place in it, whether he intentionally contributes (as with Social media) or not.  In “The Memo” Tillman uses layered voices and his stark music to express his views of the lack of art today “Just between you and me, Here at the cultural low watermark.  If it’s fraud or art, They’ll pay you to believe.”  Tillman is not happy about the current state of the world.

Musically, the album harkens back to the ‘70’s with shades of Elton John and Paul McCartney.  This is not a bad thing.  There are some incredible melodies throughout the entire album, and the production is flawless.  Tillman teams up with Jonathan Wilson and together they bring his vocals forward and support the lyrics with sparse arrangements, again borrowing from the greats of long ago.  On this album the sparse arrangements is the only way they could have gone, sure there are moments with some very lavish horn arrangements ( the opening track “Pure Comedy”, which honestly if George Harrison was alive today he would have written).  When they are used, they work, and thankfully these two know when the arrangements accentuate the song.

This is a brilliant album that would have benefited with a few more curveballs and musical changes.  But overall this seems to be quite a personal album for Tillman and one in which he is willing to stick his neck out on the line in his views.

Born and raised in Whitby, Aaron discovered music through his love of The Beatles. This led to a career in radio, writing for various publications, and ultimately a radio show about The Beatles (Beatles Universe), which ran for over four years. When not immersed in music, Aaron enjoys spending time with the loves of his life -- his wife Andrea, and daughters Emily and Linda (all of whom have an intense love of music too).
RELATED ARTICLES
album reviewsfather john mistyjosh tillman
8.0