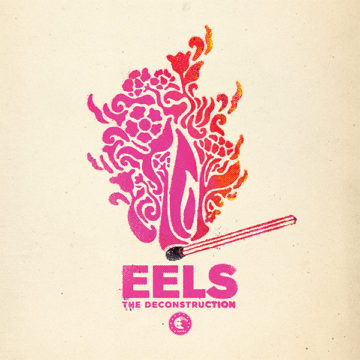 The Deconstruction, Eels’ twelfth album, manages to maintain a laid-back, mellow sound while simultaneously evoking vocalist Mark Oliver Everett’s deep soulfulness through a series of impassioned laments and love songs. Formed in 1995 by Everett and boasting a rotary of band members constantly in flux, Eels has always been a peculiar blend of pastiche and futurism, reminiscing on old music while celebrating the contemporary. The Deconstruction is no exception; its title track, “The Deconstruction” harkens back to the band’s 1996 hit “Novocaine for the Soul” in style, while other tracks explore the band’s burgeoning indie musicality.

The first and title track, “The Deconstruction” is a brooding welcome to the album: “the deconstruction has begun, time for me to fall apart”, Everett croons in the same gravelly voice that has been weaving melancholy lattices of lyric since the Eels’ first album. In “Bone Dry” Everett asks the haunting question “what becomes of men like me?” amid trickling xylophone patterns and scatting. “Premonition” is a soaring ballad on a lover’s newfound hopefulness excavated from an implied lifetime of heartache and bitterness, sweeping backup vocals overlaying a simple, plucking guitar. Overall, the album’s lyrics have a vague relatability, emphasis on the vague: the songs oscillate between a brooding self-pity and a reverence for the love that transcends these self-effacing reveries.

“Today is the Day” is The Deconstruction’s upbeat standout and seems straight out of a ‘90s movie, accompanying the main character’s alarm clock and heralding a motivational montage. “I just wanted to sing my song about change”, Everett defends his own uninspired lyrics, and we let him: the song exhorts you to smile despite yourself. “Sweet Scorched Earth” is a surprisingly beautiful ode to love: beginning with an ominous tinkling that leads into a series of horror-movie-esque descending arpeggios, the listener prepares for another maddening self-reflective tune, but the song instead transitions into leaping flutes and tender crooning. “I love the way your hair falls on your eyes, and the way the sun hits them as it dies”, Everett warbles, but the song’s musicality communicates in ways the somewhat stilted lyrics cannot.

The Deconstruction deals with enough avant-garde instrumentation that the steady percussion and guitar that shape the meandering music is lent an innovative cast. “Be Hurt” features operatic singing, violins, and shifting sound patterns that colour a fairly basic musical backdrop, adding allure to a song with a simple but powerful message: “be hurt, the world can take it and so can you”. “You are the Shining Light” is an electro-rock and roll anthem you can clap your hands to, a love song charged with a frantic energy and a feel-good motivational bent, decorated with sci-fi Theremin-esque trills. The instrumental experimentation throughout the album affirms the value of recording with an entire orchestra, songs reaching swelling crescendos of sound while also entertaining pockets of silence.

The album, while boasting several standouts, is mostly a placid hodgepodge of winding ballads and even-tempoed songs. Though not hugely fresh or exciting, it is still thoroughly enjoyable.

Isabel is an English major at the University of Toronto, and spends most of her time reading books, listening to punk rock music, and writing for anyone and everyone willing to read it. Raised in Toronto, her somewhat eclectic music taste has been shaped by a healthy mixture of mosh pits and Mirvish musicals. She thinks live music is the highest form of entertainment.
RELATED ARTICLES
album reviewse workseels
9.0