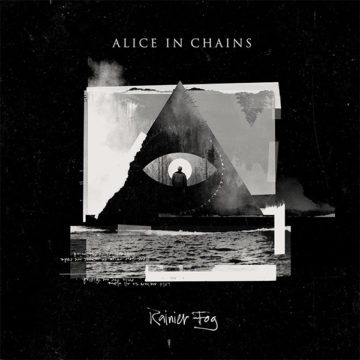 It has been five years since Alice In Chains released their stellar sophomoric release with William DuVall on vocals, The Devil Put Dinosaurs Here. The album was a smash hit with both critics and fans who chose to give the band a chance as they moved forward past their tumultuous and tragic past by making new and modern music. Since then, Alice In Chains have toured extensively across the globe and snatched headlining slots at some of the biggest rock festivals in Europe and North America. Now with the release of their highly anticipated Rainier Fog, the band – consisting of guitarist, Jerry Cantrell, DuVall, drummer Sean Kinney, and bassist Mike Inez – is back with a collection of ten songs that stands as their best yet, since reuniting, while a strong sonic connection between their current work along with their beloved classic albums.

Opening with the lead single, “The One You Know”, Rainier Fog starts off on a heavy note. While the song first drew attention for its dissonant and aggressive riff, it contains a rich level of songwriting that draws from their softer tones to create a song that is both heavy and brimming with expression and depth. The following title track — while featuring an ambient bridge section – is driven by a punk energy that refuses to let up. While the album is full of great riffs and hard-hitting tracks – the sludgy “Red Giant”, “So Far Under”, and “Never Fade” all come to mind – “Drone” stands out as one of the strongest that Rainier Fog has to offer. “Drone” is fueled by a filthy riff that sounds like something slithering out of the sewer on a stormy Seattle night, only to be accented by a series of tasteful lead lines from Cantrell and his dual vocals with DuVall. The song is further developed with a haunting bridge that blends acoustic chords with a thick wave of distortion that weaves its way into a short but melodic guitar solo. Ultimately, “Drone” alone is a masterpiece of modern songwriting that brings grunge into today’s musical climate.

Naturally, Rainier Fog is also an album that shines when the band takes an unplugged approach to truly allow for their songwriting to shine. “Fly” is such a ballad with its rich vocal harmonies and crisp acoustic guitars, only to defy all expectations with a fiery guitar solo towards the middle. Such feats only reach a new depth on “Maybe”, a song that rests on the beauty and haunting nature of DuVall’s and Cantrell’s dual vocal lines that are simply stirring. Considering that Alice In Chains are largely regarded for their intricate, frequent, and original use of such vocal harmonies, “Maybe” feels as if it takes it one step further in intensity. To close the album, “All I Am” is a truly epic ballad overflowing with a sense of darkness as the band traverses an eerie and open verse followed by an emotionally heavy chorus – anchored by a sense of anger – making for an exceptional conclusion.

As if they needed further justification as they continue forward, Alice In Chains prove once again to be as crucial and essential to the course of modern rock now as they were to grunge in the ‘90s. This is a record that sounds as hungry and ambitious as they initially did in 1990 on Facelift and again in 1992 on Dirt, all the while, Cantrell proves once again to be one of the genre’s best songwriters. Rainier Fog is a flawless record that blends unique artistry with modern rock while seamlessly bringing the band’s eclectic career full circle with an album that feels centered between both of Alice In Chains’ incredible chapters. Furthermore, Rainier Fog also stands as not only one of the greatest albums of the year, but also among some of their strongest material. Without a doubt, Rainier Fog is an album that perfectly encapsulates the sound of Alice In Chains – juxtaposing unrelenting riffs with highly emotive and dark ballads – while remaining progressive and modern, making it the album fans have ultimately been waiting for.

A passion for music has always been a part of Gerrod’s life. As a young boy, he was raised on a steady diet of the music from The Chili Peppers, Aerosmith, The Stones, Prince, and others from his mum. Raised in the GTA, Gerrod continued to foster his love for music by attending a wide range of concerts and learning the drums. His unapologetic passion for music has no bounds and has spread to a wide variety of styles, whether it be the 90’s rock that sound tracked his teenage years, the jazz he studied in university, or his newfound love for hip-hop. He recently received his bachelors in music and education from York University and is passionate about writing and reviewing good (and less than good) music. Gerrod is also the drummer and songwriter for a Toronto based rock & roll band, One In The Chamber.
RELATED ARTICLES
album reviewalbum reviewsalice in chains
8.0