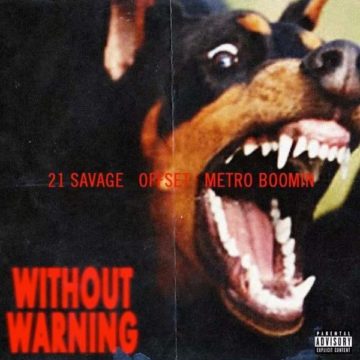 Released the day before Halloween, Metro Boomin’s collaboration album with Migo’s Offset and 21 Savage is a delight to fans of any of the three. Metro Boomin is a name stable for modern day hip hop being regarded as one of the best producers working at the moment. With a resume including everybody from Gucci Mane, Post Malone, Kanye West and more, it’s hard to find an established rapper that hasn’t dropped bars over one of his beats. In 2016 hip hop was given Savage Mode by Metro Boomin and 21 Savage which could be credited as bringing 21 Savage to a worldwide audience. 21’s simple aggressive bars matched wonderland with the dark atmosphere and heavy bass production.

Without Warning expands on this team adding Offset to give the album a wonderful back and forth between Offset’s energetic flow and 21 Savage’s passionate right to the point bars.This might be where the name  Without Warning came from as the back and forth constantly leaves the listener wondering which direction the songs will go. It should also be mentioned that this album allows Offset to really shine as the rapper he is. Offset is given more space to make an impression than being 1/3 of Migos. “Ric Flair Drip Offset” shines with a flow that perfectly mimics the beats speed as Offset dips up and down to keep the listeners head bobbing. While the album is light on features, it makes full use of the few it does possess. “Ghostface Killers” includes an intoxicating Travis Scott hook with his auto-tone vocals drawing you right at the beginning of the album. Quavo as well makes an appearance on “Rap Saved Me” with 21 Savage creating an odd but atmospheric blend of Quavo’s full of life bars and 21 Savage’s dark toned performance. The album will surely please fans but where it does fall is in it’s lack of diversity. As the album progresses, topics are revisited numerous times. I don’t think fans were expecting 21 Savage to drop a love ballad.

Without Warning is one of the most well put together hip hop albums of year. It may not venture into new lyrical territory for the artists but the fun back and forth between the two rappers over Metro’s production makes the album more than worth your time.