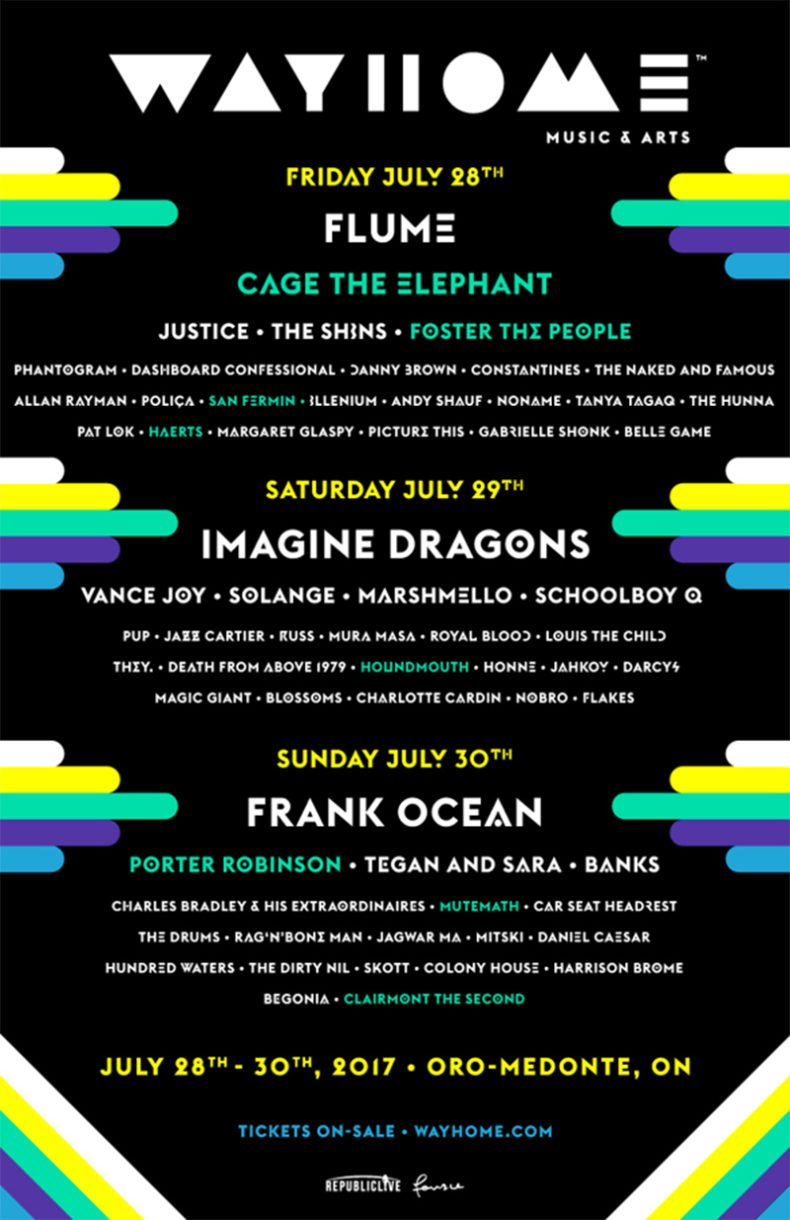 “We’re thrilled to have such an amazing group of artists joining us for WayHome this year,” said Jacob Smid, Founder, Fource Entertainment. “From artists that sell out arenas, to those with deep catalogs as well as some of the year’s hottest discoveries, we have  without a doubt a lineup for this year’s festival that contains the broadest and most exciting music showcased in southern Ontario. We are proud to feature acts that both push the envelope and brings the hits.”

“The new additions to the WayHome 2017 lineup has really completed the multi-genre lineup for live music fans across Canada,” said Ryan Howes, Creative Director, Republic Live. “Only over an hour outside of Toronto, WayHome truly is the one-stop destination for music and art fans alike to enjoy a weekend of music, spectacles, food, libation and camping. The onsite experience this year will be one-of-a-kind and an expansion from WayHome 2016 and we are very excited for fans to see all we have to offer this summer.”

Ticket Info: A limited amount of General Admission Passes for $89.99 and VIP Day Passes for $219.99 will be released on Monday April 3 at 10AM EST. Tier 1 Three Day General Admission and VIP Passes are still available at $229.99 & $599.99 respectively. Fans are also able to use Payment Plans for purchases until Friday March 31st.

WayHome Music & Arts, produced by Republic Live, is a three-day music and arts festival held at the custom-designed camping festival grounds, Burl’s Creek. In it’s inaugural year, WayHome featured headliners Neil Young, Sam Smith, Kendrick Lamar, along with Alt-J, Modest Mouse, Hozier and many more. In it’s second year, WayHome Music and Arts 2016 featured LCD Soundsystem, Arcade Fire and The Killers, in addition to performances by Major Lazer, M83, HAIM, Metric, Chvrches, Ray LaMontagne, and 60+ more artists. The festival offers multiple stages, a variety of late-night spectacles and experiences, international and local cuisine, an on-site locally produced farmers market, original art installations – past artists include internally acclaimed artist such as; DoLab and Angus Watt, and more to 40,000+ fans over the course of the weekend. WayHome Music and Arts was recently awarded the New Kid on the Block (Best New Festival) award and was nominated for Major Festival of the Year at the 2016 Canadian Music Awards. Save the date for 2017 as WayHome will be taking place July 28th – 30th 2017 at Burl’s Creek Event Grounds. www.wayhome.com.

Republic Live is a Canadian-owned live entertainment company founded in 2011, with offices in Toronto, Ontario and Nashville, Tennessee. Republic Live takes pride in creating world-class, fan-centric, time of your life experiences. The company works with a multitude of partners on a variety of platforms to create unique experiences for fans, artists, industry partners and sponsors. Republic Live’s two flagship events are Boots and Hearts Music Festival, Canada’s largest camping and country music festival and WayHome Music & Arts Festival, a kaleidoscope of sound, smell, colour, and spectacle.

More About The Festival + Tickets

SPILL NEWS strives to keep our readers up to date with news and events in the music industry. We keep you informed of the most recent information regarding new releases, tour dates, and information items about your favourite artists.
RELATED ARTICLES
cage the elephantclairmont the secondfoster the people
6.0