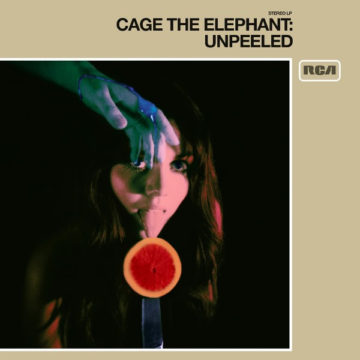 Ever since making their 2008 debut with their self-titled record, Cage The Elephant have shown no signs of slowing down as each step forward has only taken them into bigger directions. While Cage The Elephant spawned their big hit, “Ain’t No Rest For The Wicked”, a gritty and surprisingly fun look at morality in times of disparity, their follow up albums, Thank You Happy Birthday (2011) and Melophobia (2013) saw the band continue to grow from opening act to headliner.  However, it was 2015’s Tell Me I’m Pretty that solidified the band as one of the biggest bands in the modern indie rock scene. I remember catching the band open for Stone Temple Pilots at Toronto’s Air Canada Centre in 2010 and being blown away by their energetic and downright bombastic performance style which, in many ways, greatly contrasted from what I had heard of from their record. After all, I don’t think anyone that night was expecting to have to carry the sweat drenched body of lead singer Matt Shultz as he withered and slithered across the outstretched hands of those in the pit, myself included. With that image, it is important to note that Cage The Elephant’s recently released live album, Unpeeled is just as the title implies: acoustic, unplugged, and bare-bones with the aid of a string quartet and additional percussion. The record was recorded live from a string of intimate performances in places like Los Angeles, Nashville, and Washington DC and truly captures a beautiful and artistic side to the band’s catalogue in a new live setting.

Cage The Elephant’s material translates excellently in an acoustic setting.  Songs like “Ain’t No Rest For The Wicked”, “Back Against The Wall”, “Sweetie Little Jean” and “Aberdeen”,  were performed with just as much conviction as when they were first recorded. The addition of strings however, brings an entirely new layer of depth to the album. The string section adds a certain lushness that makes the overall performance stand out even more. The strings have the most impact in tracks such as “Too Late To Say Goodbye”, “Cigarette Daydreams”, and “Cold Cold Cold”. The strings are absolutely a welcome addition, making the tour and resulting live album a much more unique experience.

In an interesting choice, save the applause, Unpeeled does not sound like a live album. Part of this is how polished the album sounds as the post production truly makes it sound as if it was recorded in a studio. I’m not sure where I stand on this. For starters, the album sounds excellent, but by making it sound less live, it has removed some of the energy from the overall performance and makes the fusion of the band and the added strings feel less organic and more like they were layered together at different times. Perhaps if Unpeeled was a studio record that saw Cage The Elephant revisit their discography with a different approach, this would sit better with me, but where it is live, I would have hoped for the album to sound a little more live and less like it was in a studio.

While acoustic albums have become a staple, especially in today’s musical climate, very few albums of this style incorporate a full band with the inclusion of a live string and percussion section. This is where Cage The Elephant is striving to stand out from their peers with the hopes of reaching a level of sophistication that was once heard in 1994 on Nirvana’s MTV Unplugged in New York. After listening to a twenty-one track album, the band both achieves this, and they don’t. For diehard fans of Cage The Elephant, Unpeeled is a treasure trove which catches the band in a very different tone which captured the band on their highly exclusive, nine date Live & Unpeeled tour, giving them a glimpse at a tone they may not have heard the band take, and who knows if they will one day replicate this again. The album is very good, and the songs are each performed excellently, however it left me longing to hear an electric live set from Cage The Elephant as Unpeeled clocks in at just under an hour and twenty minutes and at times feels like it could benefit from such a shot of raw energy their performances are known for. While some songs do this with speed, filling in the space between the sweet, soft, and sometimes melancholic melodies, it can feel like some of the energy was lost in the translation from electric to unplugged.  Despite that, Unpeeled challenges the all to normal live album which documents a regular concert making the album a worthwhile record documenting one of indie rocks biggest bands at what may be one of their creative peaks.

A passion for music has always been a part of Gerrod’s life. As a young boy, he was raised on a steady diet of the music from The Chili Peppers, Aerosmith, The Stones, Prince, and others from his mum. Raised in the GTA, Gerrod continued to foster his love for music by attending a wide range of concerts and learning the drums. His unapologetic passion for music has no bounds and has spread to a wide variety of styles, whether it be the 90’s rock that sound tracked his teenage years, the jazz he studied in university, or his newfound love for hip-hop. He recently received his bachelors in music and education from York University and is passionate about writing and reviewing good (and less than good) music. Gerrod is also the drummer and songwriter for a Toronto based rock & roll band, One In The Chamber.
RELATED ARTICLES
album reviewscage the elephantrca records
8.0