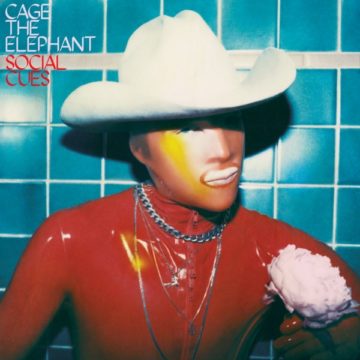 Cage the Elephant are of a rare breed. They’ve been at it for over decade and have still found a niche where they can be a commercially successful rock band in the streaming era, a rare feat. Like their peers The Black Keys, they make music that gets played in car commercials but actually sounds great blasting from a car speaker. When I saw them live a few years ago, frontman Matt Schulz performed like a millennial Iggy Pop; jumping into the crowd and walking on their hands as they raised him up like Jesus. It was pretty great.

On the band’s newest album, Social Cues, Schulz is as charismatic as ever. It’s a good thing too, because while the songs here are still catchy, some questionable production choices and bland lyrics hold the album back.

At their best, the songs pare new wave inspired sleekness with the band’s usual swagger and wind up sounding something like the Rolling Stones on Tattoo You or a classic Cars song. The opening run of “Broken Boy” and “Social Cues” hit that sweet spot.

When it’s bad though, it’s bad. Too often, it seems like Cage the Elephant are trying to make the next big alternative crossover song, a la “Feel It Still.” The glossy production that comes along with that sucks the energy away. First single “Night Running,” inexplicably features a rapping Beck and some weird electro touches. Cage the Elephant songs were getting featured in video games when I was in middle school. They don’t need a crossover hit, they already have crossed over.

Social Cues isn’t the best Cage the Elephant album by a long shot but it’s another testament to their staying power. A few of these songs will probably get some radio play and I’ll be happier for it. Even if it’s “Night Running.”

Spill Magazine strives to keep our readers up to date with news and events in the music industry. We keep you informed of the most recent information regarding new releases, tour dates, and information items about your favourite artists.
RELATED ARTICLES
album reviewalbum reviewscage the elephant
8.0