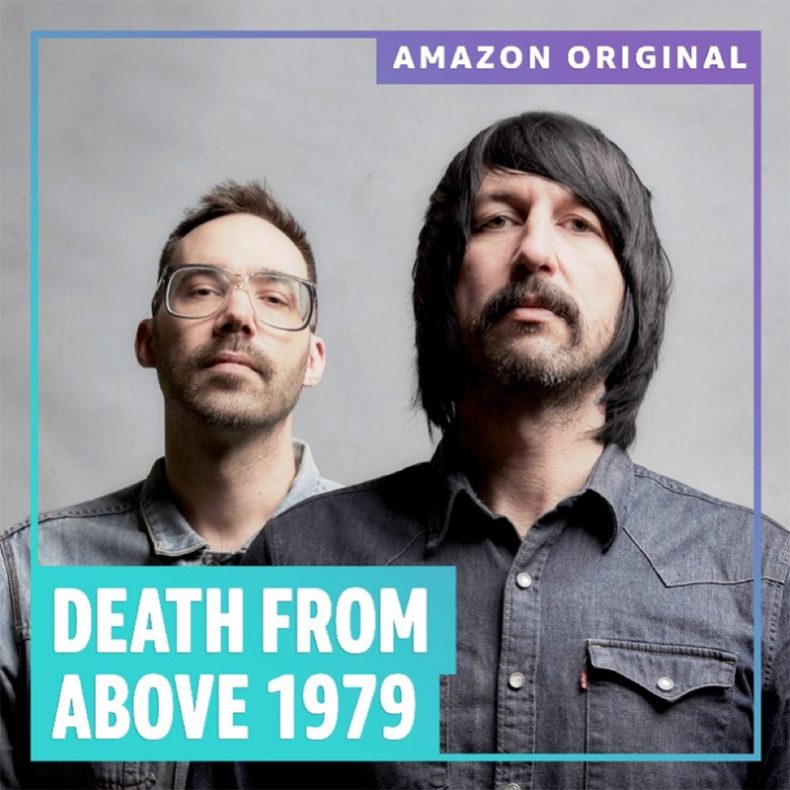 Death from Above 1979, made up of Sebastien Grainger and Jesse F. Keeler, released a brand-new, Amazon Original cover of Journey’s iconic hit, “Don’t Stop Believin‘.”

Available only on Amazon Music, the song finds the Toronto duo taking on one of Journey’s most well-known and revered songs and putting a characteristically ferocious DFA spin on the track. Fans can hear the track now on Rock Scene, Amazon Music’s home for the most exciting new rock music from around the world.

“We made a kind of witchy version of the song that would make Steve Perry magically join Journey again,” said Sebastien Grainger of Death From Above 1979.

Earlier this year, Death From Above 1979 released their highly anticipated fourth studio album, Is 4 Lovers.

To record this album, the pair locked themselves away for several weeks in a single room basement in Los Angeles’ Highland Park to see what would happen and eventually emerged with the purest distillation yet of the power, precision, and nuanced personality at the heart of DFA’s unique and influential vision. Written, recorded, produced, and mastered by the duo, their fourth album was born, and DFA has never sounded more assuredly like itself than it does on Is 4 Lovers.

To support the album, Death from Above 1979 will embark on an expansive North American tour, with dates in March and April 2022. Full tour dates, including the band’s planned 2021 festival appearances, can be found below.

DFA roared out of Toronto with the uncompromising one-two punch of 2002’s fuzz-bomb EP Heads Up and 2004’s epochal debut album You’re a Woman, I’m a Machine, complete with a North American arena tour with Nine Inch Nails and Queens of the Stone Age, before deciding mid-tour to part ways due to the strain of constantly touring. Almost a decade later, the rekindled DFA fireworks lit stages around the world a blaze — amassing a posse of fans so passionate they incited a genuine, barricade-smashing riot at Austin’s Beauty Bar at the 2011 South by Southwest festival. Playing Lollapalooza, Coachella, Glastonbury, Reading/Leeds, Osheaga, Lowlands, and more, DFA continued to take the world by storm. Their second album, The Physical World (2014), took a No. 3 spot on the Canadian Billboard album chart and peaked at No. 28 on the U.S. Hot 200, not to mention No. 3 and No. 7 spots on Billboard’s Top Alternative and Top Rock registries, respectively. Arriving at No. 20 on the Canadian Billboard album chart, DFA’s scorching 2017 outing, Outrage! Is Now, prompted Pitchfork to remark that “Death From Above now sounds more vital than ever.”

Fans can hear Death from Above 1979’s cover of “Don’t Stop Believin'” on the Rock Scene playlist, or by simply asking, “Alexa play the Amazon Original song from Death from Above 19790” in the Amazon Music app for iOS and Android and on Alexa-enabled devices. In addition to the new track, Amazon Music listeners can access hundreds of Amazon Originals featuring both emerging and established artists across numerous genres, available to stream and purchase only on Amazon Music.

SPILL NEWS strives to keep our readers up to date with news and events in the music industry. We keep you informed of the most recent information regarding new releases, tour dates, and information items about your favourite artists.
RELATED ARTICLES
death from above 1979dfadfa 1979

by SPILL NEWS on February 6, 2021
THE RETURN OF DANCE PUNK: DEATH FROM ABOVE 1979 ARE BACK WITH NEW SINGLE “ONE + ONE” AND ALBUM ANNOUNCEMENT UNIVERSAL MUSIC CANADA Death From Above 1979 (DFA), the boundary pushing musical alliance made up of Sebastien Grainger and Jesse F. [...]

by Susana Meza on May 31, 2018
ILLUMINATION CONCERT SERIES – DEATH FROM ABOVE w/ TEENANGER & CASPER SKULLS @ THE PHOENIX CONCERT THEATRE, TORONTO MAY 31, 2018 The Torontonian stop of the Canada wide Aurora Illumination Series was simply memorable. The Phoenix [...]