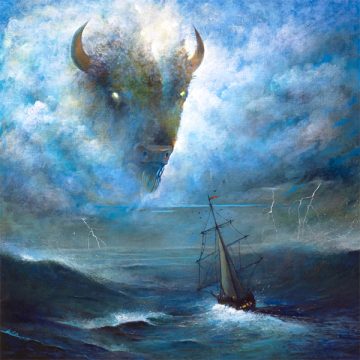 With its upcoming Canadian tour with opener Skye Wallace kicking off in October, Canada’s most in-demand duo, Crown Lands, has returned with its latest EP, White Buffalo. It is a four-track EP, consisting of the recent singles “White Buffalo” and “The Oracle”, along with new tracks, “Inner Light” and “The Witching Hour (Electric Witch)”. It follows the release of its 2020 self-titled album as the band continues to grow both musically and in size.

In an interesting choice, Crown Lands open White Buffalo with the instrumental “Inner Light”. As the only truly new song on the record, “Inner Light” introduces yet another sound of the vast pallet that Crown Lands have demonstrated in just a mere few years. Richly-inspired by Eastern uses of melody and harmony, “Inner Light” is a slow-burning track that opens acoustically and continues to grow to add drums and electric guitar that build in a trance inducing manner. Despite its recent, more progressive direction and anyone’s tendency to overcomplicate an instrumental rock track, Crown Lands exercises a level of taste in their restraint through “Inner Light”.

The EP continues with their most recent pair of singles, originally released over the summer. “White Buffalo” is easily Crown Land’s most pop-infused song, despite its odd time signature, thanks largely to the melodic vocals and crunching, rhythmic guitar. “The Oracle”, on the other hand is a 13-minute progressive odyssey that ebbs and flows at its own, slow pace, growing, bending, and moving in unexpected directions throughout its length. It is a masterclass in songwriting, free of the constraints of traditional genres as they shift from an ambient start before building up into a hard rock and gritty verse. Additionally, the track features a fiery guitar solo. Most interesting, however, is “The Witching Hour (Electric Witch)”. Originally released on 2020’s Wayward Flyers Vol. 1, the electric version of the originally acoustic track is stunning. Remaining equally stirring as the original, “The Witching Hour (Electric Witch)” breathes new life into the song.

Crown Lands continues to demonstrate, time after time, release after release, that they’re Canada’s most impressive rock band and should be considered among the most exciting bands the genre has seen over the course of the last decade. As they continue to rewrite the rule book for up-and-coming artists and soar past all expectations, their latest release, White Buffalo, digs deeper into their progressive rock roots while also shining a light on other, more modern and melodic influences. Ultimately, White Buffalo proves that the Crown Lands’ sound is in constant development and wherever they go next is sure to be yet another creatively driven stop on their musical journey.

A passion for music has always been a part of Gerrod’s life. As a young boy, he was raised on a steady diet of the music from The Chili Peppers, Aerosmith, The Stones, Prince, and others from his mum. Raised in the GTA, Gerrod continued to foster his love for music by attending a wide range of concerts and learning the drums. His unapologetic passion for music has no bounds and has spread to a wide variety of styles, whether it be the 90’s rock that sound tracked his teenage years, the jazz he studied in university, or his newfound love for hip-hop. He recently received his bachelors in music and education from York University and is passionate about writing and reviewing good (and less than good) music. Gerrod is also the drummer and songwriter for a Toronto based rock & roll band, One In The Chamber.
RELATED ARTICLES
album reviewalbum reviewscrown lands
8.0