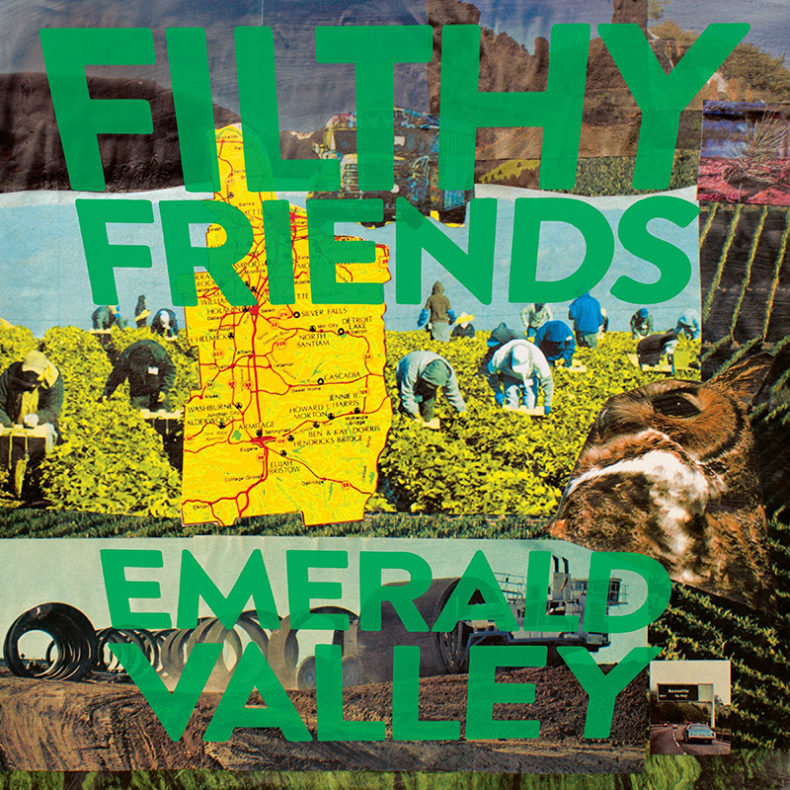 Filthy Friends have announced the release of their second full-length album Emerald Valley, out May 3 via Kill Rock Stars. They released the first track “Last Chance County” this week. You can pre-order Emerald Valley HERE.

The first releases from Filthy Friends, the scorchingly melodic rock group whose membership consists of some of the most original musical voices of the past three decades, came as a small, delightful shock to the system. Not only because of the names associated with the project, including Sleater-Kinney co-founder Corin Tucker, R.E.M. guitarist Peter Buck and indie stalwarts Scott McCaughey and Kurt Bloch, but also because of how ably they were able to mesh their individual sounds into a crackling melodic whole on debut album Invitation.

Now, with their follow-up— Emerald Valley ,the Friends have proven their collective mettle, crafting a thematic suite of songs that finds the quintet digging deeper into their bag of musical tricks and giving Tucker room to rage about and mourn the fate of our planet and the people who inhabit it.

The core idea came from a demo Buck shared with Tucker for a grinding blues song that eventually turned into this new album’s title track. The minute she heard it, Tucker says, it sparked something within her: “I had this long poem growing in my brain,” she says. “It turned into a sort of manifesto about the kind of place we are at as a country but also as a region. Just taking stock of where we’re at and feeling like I can’t believe we let things get this bad.”
While Emerald Valley s tarts off with idyllic imagery (“Rolling fields, they speak your name/vibrant green is here again”), the album and its title track slowly reveal the ugly underneath, with human arrogance and hubris hurting the Earth and the people who take on “backbreaking work for little pay.”

From there, the Friends address growing concerns over oil production and distribution (“Pipeline”), gentrification and income inequality within the band’s hometown of Portland, Oregon (“One Flew East”), and taking on the voice of the desperate souls that are getting crushed under the wheels of capitalism (“Last Chance County”). The band paints these themes with many different shades of the rock palette, nestling a snapping punk tune between a bit of jangly pop and an almost-shoegaze ballad, with stops along the way for songs that burn as hot and move as slow as lava and tunes that stay steady and fast as a rocket launch.

Emerald Valley is also a testament the indefatigable spirit of the Filthy Friends themselves. Scott McCaughey bounced back from a stroke he suffered in late 2017, which curtailed the band’s tour plans and is playing with more fire than ever. As well, Corin Tucker and Peter Buck were able to devise some amazing work even as their creative energies were being pulled toward other projects like Arthur Buck and Sleater-Kinney. Too, the band was able to bring a new member into the fold with drummer Linda Pitmon coming on board to replace Bill Rieflin without losing an ounce of their power.

We could all take a lesson from Filthy Friends. As proven by Emerald Valley, when a group of like-minded people gather their individual strengths together and point them toward a singular goal, there’s no telling how powerful they can become and what an impact they can make on the world at large.

by Ljubinko Zivkovic on June 24, 2022
Caleb Nichols Ramon Kill Rock Stars When the album starts with a song titled “Listen to The Beatles,” you can be sure which way things are going, at least, musically. And Caleb [...]