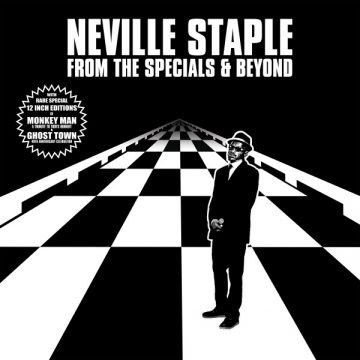 NEVILLE STAPLE
FROM THE SPECIALS AND BEYOND
CLEOPATRA RECORDS

Former member of Two-Tone legends The Specials, singer Neville keeps alive the sound, approach, and energy of the late 70s – early 80s style, maintaining the love and respect the original practitioners had for the older forms of Jamaican music that were the style’s major influence.

There is ska aplenty here, from the sing-along of the opening, political “Right From Wrong” and the good timing encouragement of “Celebrate With You” (with Neville’s wife Sugary Staple helping out throughout) to the Two-Tone of “Don’t Let Life Pass You By”, the punky “Something’s Wrong”, and “Way Of Life” which also features The Selecter’s guitarist Neol Davies, and the self-explanatory ‘World Turned Upside Down’.

Vintage soul with a ska touch comes courtesy of a remake of Ben E. King’s “Stand By Me”, and Neville even enlists the Jamaican foundation singer Derrick Morgan for “Housewives Choice”. Derrick duetted with Patsy Todd on the original in 1961; Sugary successfully takes the female role this time around. “Miss Dis N Dat” has vintage DJ Clint Eastwood on a fine piece of old-time reggae with dub leanings and re-workings of Two Tone classic “Ghost Town” and Toots & The Maytals’ “Monkey Man” (which The Specials also recorded early on) complete this rather fine release.

Turn it up, sing along and skank on (and on)!

Norman Darwen grew up in north-west England admiring Elvis’ gold lamé jacket, Lord Kitchener’s way with words, and his much older brother’s and sister’s dancing to The Rolling Stones’ ‘Little Red Rooster’ on the telly. He’d wind aforementioned brother up by reading the entire contents of an R’n’B magazine he used to have to collect from his local shop for him and then reciting back as much as he could remember. Some years later he’d wind up his own friends by telling them who these people were that Led Zeppelin etc were covering – Willie Dixon, Howling Wolf, Otis Rush etc. These days he still listens to the blues, but has added a taste for reggae, zouk, rap, folk and anything else that takes his fancy…
RELATED ARTICLES
album reviewalbum reviewscleopatra records
8.0