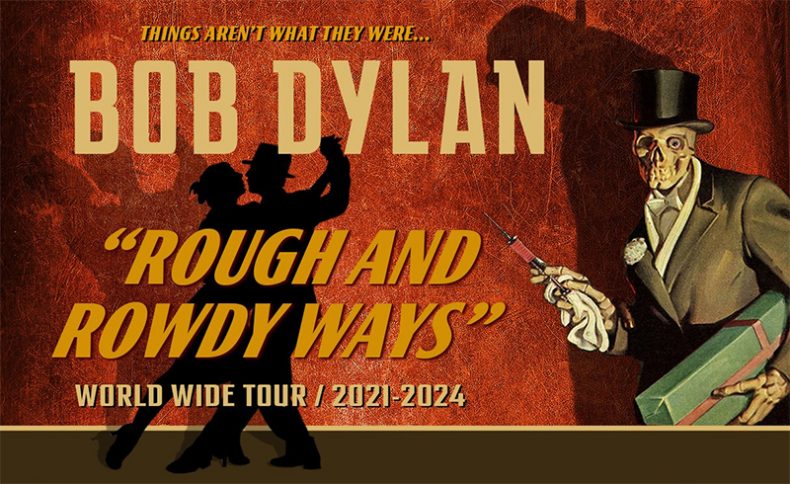 It seemed surreal — to be sitting in the iconic Beacon Theatre in New York City on a cold November evening waiting for Bob Dylan. There was no opening act, and at 8 pm, the lights went out, leaving the stage backlit, while Bob Dylan, sitting at an upright piano, began to sing  “Watching The River Flow”. It was an emotional opening to a show that many have waited far too long to see. “What’s the matter with me/I don’t have much to say” he sang, but Dylan has a lot to say and a great many of us want to hear what is on his mind. The staging was simple but effective, and the audience was ready.

Dylan is touring to support his most recent album, 2020’s Rough And Rowdy Ways. In fact, he performed eight of the 10 songs, leaving out the 17-min “Murder Most Foul” and “Crossing The Rubicon”. Already classics, they came alive on the stage. His growling the lyrics to “Black Rider” was absolutely breathtaking. And “False Prophet” just leaped off the stage into the collective consciousness of the audience. The absolute silence as he sang “I ain’t no false prophet/ I just know what I know what I know”. The sheer power of Bob Dylan singing that in person is beyond words.

Of course he dipped into his vast catalogue and performed his classics, such as Blonde On Blonde’s “Most Like You Go Your Way And I’ll Go Mine”, “I’ll Be Your Baby Tonight”,  and “To Be Alone With You”. Perhaps the biggest surprise was his new rocking arrangement of “Gotta Serve Somebody”, which allowed the band to highlight their musicianship, especially drummer Charley Drayton. His version of “Every Grain Of Sand (Shot Of Love)” was full of emotion and was perfect for the evening. He even performed a song from Tempest (“Early Roman Kings”) and Triplicate (“Melancholy Mood”).

But it was his live versions of Rough And Rowdy Ways that stole the show. “Key West (Philosopher Pirate)” was almost biblical. The energy and power in his voice was commanding and demanding of attention, which he clearly received from the audience. “Mother Of Muses” was another highlight. All of the songs actually benefited from the live performance.

Dylan stayed behind his piano for the most part, but would come out centre stage to perform his songs. He never picked up a guitar, but that was fine. His voice was strong and he delivered the songs with such intensity that it was impossible not to devote 100 percent attention to the man. He spoke very little, just at the end thanking The Big Apple, but again, that did not matter. Dylan’s mere presence made the show intimate and personal.

This was the second of three sold-out shows at The Beacon as Dylan continues with his Rough And Rowdy Ways Tour. It was an absolute honour to have witnessed the man himself perform new songs and a few classics. There was no encore, there didn’t need to be, and in just under two hours Bob Dylan proved why he is so highly regarded. This was an evening that one will never forget.

Born and raised in Whitby, Aaron discovered music through his love of The Beatles. This led to a career in radio, writing for various publications, and ultimately a radio show about The Beatles (Beatles Universe), which ran for over four years. When not immersed in music, Aaron enjoys spending time with the loves of his life -- his wife Andrea, and daughters Emily and Linda (all of whom have an intense love of music too).
RELATED ARTICLES
bob dylanlive reviewnew york